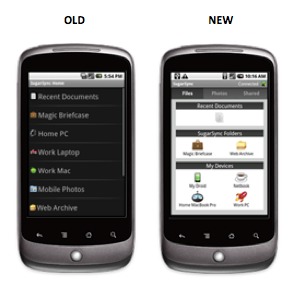 SugarSync is file sync, backup and file sharing service for Android. Today, they announced their new 3.0 version for Android and it has a few great changes to their already good service. This is another “Cloud-Based” solution for accessing all of your photos, music, videos and other documents while on the go. This app will be available tonight in the Android Market.

* Photo Public Links: Create a Public Link (direct URL) to any single photo directly in any photo album, making it even easier to share a photo via Facebook, Twitter, IM, email and more.
* Optimized boot-up: SugarSync’s new desktop client will now utilize fewer system resources when a user boots up their computer. (New desktop client to be phased in over the next week).

The entire UI has been overhauled to help you share files more quick and easy. Now, when you want to share a folder with your friends and you start to enter their email address, it will auto complete the address for you. You will also gain the ability to check the upload/download status of the file you wish to share. All files should now upload faster than ever and the application has been optimized. It should be faster and more stabile then any of the previous versions. Tonight is the big night, get ready to upgrade or try it out for the first time. 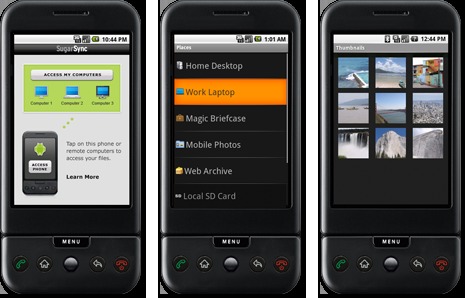 SAN MATEO, CALIF., May 4, 2010 – SugarSync Inc., makers of the award-winning SugarSync file sync, backup and file sharing service, today announced that three key updates to the SugarSync service will roll out tonight: SugarSync for Android 3.0, SugarSync in German, and an upgrade to the core service.

“The demand for cloud and device sync services is growing exponentially as consumers and professionals purchase secondary devices such as smartphones, iPads and netbooks,” said Laura Yecies, CEO at SugarSync. “Rapid innovation is essential to keep pace, and SugarSync is rising to the challenge by focusing on delivering ongoing upgrades that achieve a singular vision: make cloud-based sync easy for everyone.”

SugarSync for Android 3.0 features a redesigned interface, making it easier and faster than ever for people to remotely access, sync and stream all of their files, photos and music to their Android devices. Aside from the new aesthetic and flow, conveniences such as e-mail auto-complete for sharing files, new visibility into file upload/download transfer status, and photo detection were added. Details are available here.

SugarSync is also releasing an incremental upgrade to the overall service, with multiple features to enhance performance and streamline syncing, add new convenience tools, and enhancing the discoverability of key SugarSync features.

The most apparent change is a new Getting Started feature in SugarSync’s Web application, a version of SugarSync’s popular mobile game launched last year. The new version empowers SugarSync users to earn an extra 250 MB of free space simply by trying out SugarSync’s most valuable features.

Getting Started offers tutorial-style instructions and additional feature detail on key areas such as Shared Folders and Public Links, making it easy for both new and existing users to discover features and get the most out of the service.

* Photo Public Links: Create a Public Link (direct URL) to any single photo directly in any photo album, making it even easier to share a photo via Facebook, Twitter, IM, email and more.
* Optimized boot-up: SugarSync’s new desktop client will now utilize fewer system resources when a user boots up their computer. (New desktop client to be phased in over the next week).

“We listen closely to our users and to the sync enthusiast community at large, and are always striving to optimize the SugarSync experience – in big ways and in small,” said Yecies. “In the past year, we’ve launched many of the most requested mobile apps including iPad, plus enhanced our unique selective sync, launched an augmented Business version, and opened up our core platform and Android cloud APIs to third-party developers. It’s been an active time, and we’ve only just begun.”

To highlight SugarSync’s advantages, last week the company launched a new promotion: new users can earn an extra free 1 GB of space simply by sharing on social media which feature encouraged them to try the service. SugarSync’s referral program also offers users the ability to earn up to 105 GB of free space through friends-and-family sign-ups. The new offer is available at http://www.sugarsync.com/sync-outside-the-box.

SugarSync is a powerful syncing and online backup service providing always-connected consumers and busy professionals a powerful way to organize, manage, share and access all their files on-the-go, instantly and securely from any Mac, PC or mobile device. SugarSync can sync files in any folder to seamlessly match the way people organize their folders and manage their digital lives. SugarSync’s file sharing and collaboration tools also allow users to share any folder or file with either read-only or unlimited access to anyone they choose.

SugarSync supports virtually all computer and smartphone operating systems, including Windows, Mac, plus boasts native apps for iPad, iPhone, Android, Blackberry, and WinMo. This breadth of support ensures that users can choose to work from virtually any device from any location.

SugarSync is a powerful sync, sharing and backup solution ideal for busy professionals and digitally-connected consumers. It enables users to access documents, photos and music across all of their devices, including desktops, laptops and smartphones. The company was founded in 2004 and is headquartered in San Mateo, California.