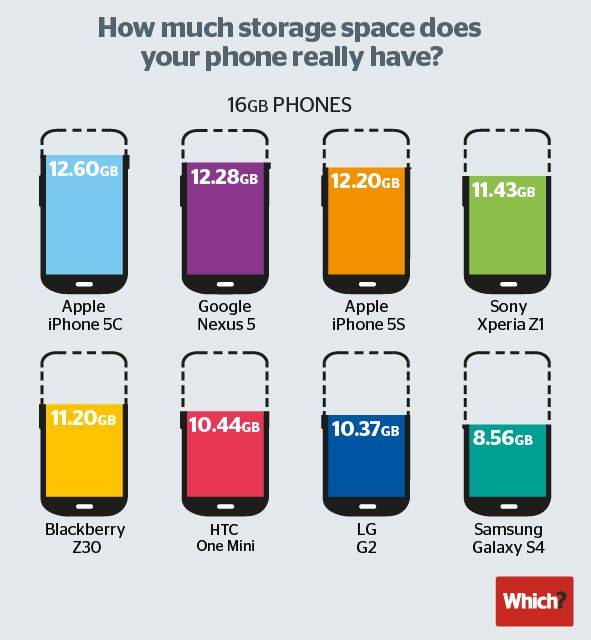 When you but a smartphone, the storage listed isn’t what you actually get. The operating system has to be fitted in, so you end up with less. That’s pretty common knowledge, but who does it best? Who is giving you the most storage? The Android world might lag behind the entry level iPhone, but the hero device we all crave isn’t far behind.

A study was conducted by UK site Which, posing the question of which current smartphone has the most storage when you get it in-hand. Out of the box, nothing loaded or added, who gives you the most available memory on your 16GB device? As mentioned, the iPhone 5C is the winner, giving you 12.60GB after iOS is loaded. The Nexus 5 is second, giving us 12.28GB after KitKat is loaded. The iPhone 5S ranks third with 12.20GB, understandable since it adds some features (fingerprint scanning) the 5C doesn’t. Rounding out the top five are the Xperia Z1 with 11.43GB, and the Blackberry Z30 with 11.20GB.

From there, we find ourselves further lamenting skinned Android devices. The HTC One mini has 10.44GB, showing the bulk of Sense when compared to stock Android. The LG G2 is close behind with 10.37GB, leaving Samsung to pick up the rear. With 8.56GB available on a 16GB device, TouchWiz is showing its age — and bulk. Swallowing up nearly half of your system memory is just silly, but there is a saving grace.

Though we dislike the bulky skins some OEMs put on, the inclusion of an SD card slot tends to bail them out in this regard. The main offender here is the biggest winner when it comes to memory add-ons, as the S4 will support up to a 64GB SD card. The top three don’t offer such storage options, instead asking that you utilize the cloud. Now that you know your memory takeaways, the choice of cloud or local storage is up to you.
VIA: Cult of Android