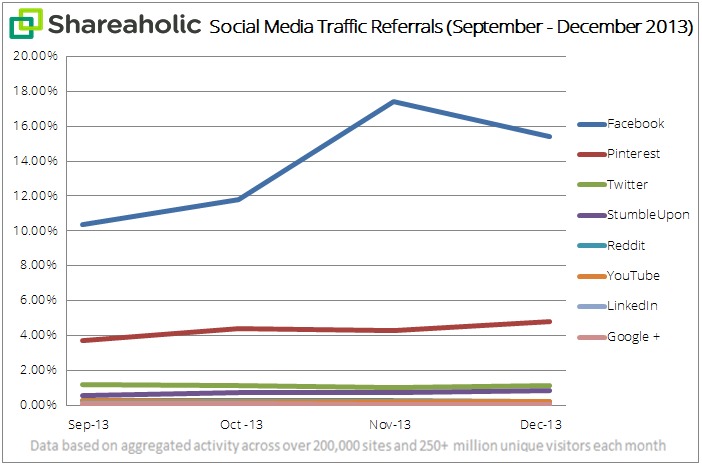 A recent study by Shareaholic highlights some interesting points about how we get where we’re join on the Internet. Quite a few of us find our way around via social media, but which sites matter when it comes to Internet traffic? While Facebook remains king, some interesting stats show others aren’t doing so well.

With this one, there was no sampling of users. Rather, Shareaholic samples traffic info from their network of over 200,000 sites. Of those sites, about 250 million unique visits occur monthly. From those numbers, they took the eight largest social media platforms and broke out how much traffic they account for.

Facebook, as expected, gained the biggest piece of the pie — by a wide margin. With a 5% uptick in traffic, Facebook gained almost 50% over last quarter. Pinterest continues their growth trajectory, growing just over 30%, and StumbleUpon made a big gain with 54.36% growth. Sadly, StumbleUpon comprises under 1% of overall traffic, so they’re still a far cry from the leaders. 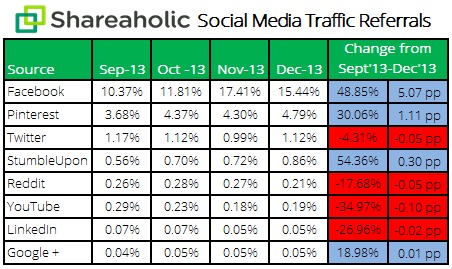 They are catching up to Twitter, which maintains right around 1% of total traffic. The microblogging site also dipped a little this quarter, dropping 4.31% overall. Reddit sunk 17.68%, and LinkedIn fell almost 27% over last quarter. Google had a strange yin yang thing going on, wherein YouTube fell nearly 35% while Google+ gained 18.98%.

Unfortunately, neither Google+ or YouTube cause enough traffic to warrant concern. YouTube holds just over 0.2% of traffic, while Google+ generates a paltry 0.05% of overall traffic. Though Google+ gained slightly, the growth is nowhere near Facebook. LinkedIn is the sole site making Google look good, as they are on pace to dip below Google+ next quarter.
VIA: The Next Web