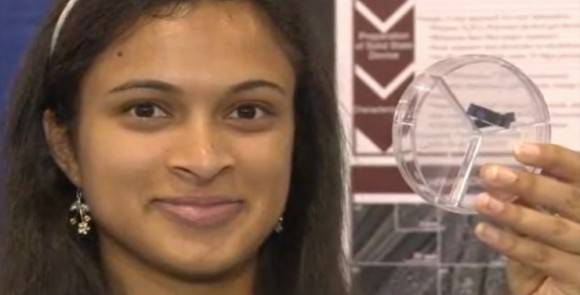 This year at the Intel International Science and Engineering Fair a surprising invention from one teen student stunned the crowd, yet only came in second place. What would that be? A new way to recharge a cellphone battery completely in only 20-30 seconds. Sounds amazing right? 18-year-old Eesha Khare from Saratoga California, came in second place with this invention of a supercapacitor that can charge a battery very quick.

The news has been spreading this afternoon like a wildfire, and has many in the tech industry quite interested. So much in fact, that Eesha Khare even mentioned Google’s reached out to her for more details. While we don’t have anything further on that development, we’d love for Google to add her to the team and bring the first truly rapid charging smartphone to market. We’re getting ahead of ourselves though.

This bit of technology has landed Khare a runner-up prize of $50,000 USD in scholarship funds which she’ll use to attend Harvard University. This is where she aims to continue her ground-breaking research on the project. Her battery material will not only be able to be utilized by the small batteries of smartphones, but in electric cars and many other applications. This isn’t a charger, it’s a new material that is super small, and charges extremely fast.

Back to Intel’s event, the full list of winners is available for those interested. Looks like her technology won more than a few categories. Reason being is her technology as it sits right now is able to last for roughly 10,000 recharge cycles. Current battery tech is lucky to remain durable past 1,000.

Khare goes on to mention the technology is currently powering things like LED’s with ease, so obviously a full smartphone would take tons more research, but is very doable. The system in which she is using is flexible, durable, and can be added to clothing, fabric, flexible displays and more. Get ready for this to be in our upcoming Google Glass, wearable technology like smart watches, and much more.

This is still in the very early stages, but a breakthrough in battery technology has been needed for a long time. Hopefully this is one that will stick, and come to consumer products relatively quick.