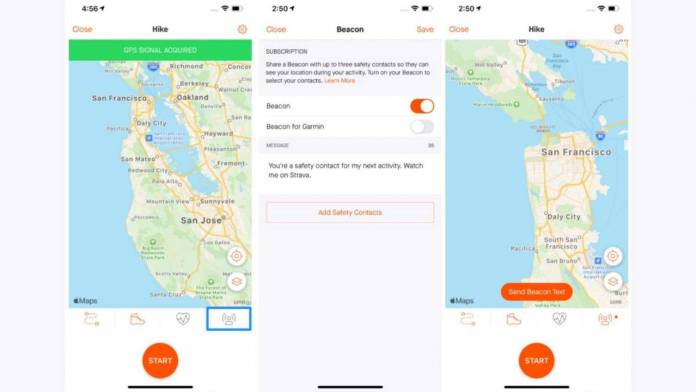 Strava is one of the most popular third-party apps on smartwatches for those who want to track their running and cycling sessions among other fitness activities. The past couple of days though there has been a good news and bad news kind of situation. The good news is that their safety feature Beacon, which shares your real-time location to selected people, will be available for free for all users, not just for their subscribers. The bad news for those with devices running on Wear OS 2.0 is that the app will no longer support this and instead they have moved on to Wear OS 3.0.

Some of the features of the Strava app that were previously available for everyone suddenly became exclusive to paying subscribers in May of last year. This included things like leaderboard analysis and third-party leaderboards. Another thing that got placed behind a paywall is the Beacon feature which basically let selected people know the real-time location of Strava users. It is useful for those who need to let their loved ones know where they are in case of an accident or any incident which would prevent them from calling.

The good news now is that Beacon will be a free feature now for anyone who wants to use it, subscriber or not. It is found the Records navigation menu and can be toggled on and off by tapping the icon. You can then choose up to three people from your contacts you want to have access to your real-time location. Then you tap on the “Send Beacon Text” button and it will send a text to the contacts and they’ll be able to see an update of your location every 15 seconds as long as the recording is active. They don’t need to have the Strava app to monitor you as they just click on the URL that will open in a browser.

However, those who are using Wear OS 2 devices will no longer get support for the Strava app as of August 2021. From now on, they will only support the Wear OS 3.0 devices and right now, that’s only the Galaxy Watch 4 devices. This means those who are not Galaxy Watch 4 owners will not get updates on their app. They’ll still be able to use the app of course but there will be no more new updates and that can affect the app performance in the long run.

We don’t know yet which other new smartwatches will be running on Wear OS 3.0 which is a collaborative effort between Google and Samsung. So if you want to have an updated Strava app, you have to buy a new Samsung Galaxy Watch4 or just wait around for more devices to be announced.