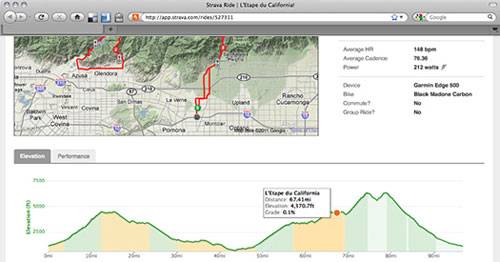 I bet there are plenty of people that use Android smartphones that like to cycle seriously. The serious sort of cyclists might like to check on the speed, distance, and other stats on their latest ride to compare to previous workouts. The catch is some of the cycling apps for Android are expensive. A company called Strava has announced a new free cycling app for Android users.

The app is on the Android Market right now and uses the GPS receiver inside your smartphone. The app allows you to record your rides and plot the course on maps. The app will also keep track of home many miles you rife and will offer your average speed. If you ride with a group or have friends that ride the same route and use the Strava app, it will allow for some cool competitions too.

The riders can compete for king of the mountain to see who gets the fastest time on the same course. The data from your ride can also be uploaded to the Strava Community as well. Other details the app tracks include your elevation and elapsed time.

Some users of the Strava service have pointed out in comments that there are limits on the use of the app not mentioned on the press release or the Android Market app page.