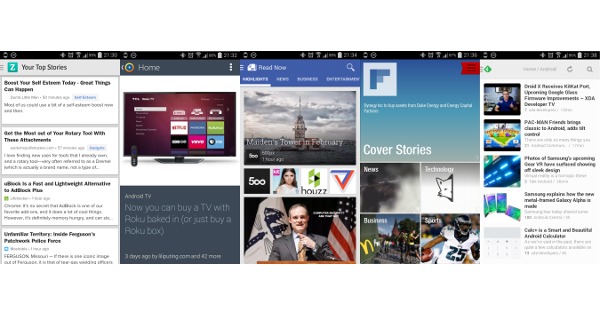 Thanks to the Internet and mobile devices, we live in a world where we get an almost never-ending flow of news available at our fingertips. So much so that now our problem is how to best handle that flood of information rushing towards us. News readers have become not just our source but also our filter and our shield, not just letting us choose the news and topics that we do want while keeping others at bay, they also give a bit of a visual flair to those bits of information, making the reading experience more pleasurable and engaging. Here are our top 5 picks for news readers on Android.

This one is an oldie but goodie. Zite is one of the earliest entries in the news reader category and exemplifies the basic concept of many modern readers today. You are basically given a curated list of topics to choose from and, using that initial selection, it builds up your personal Zite, with news selected specifically for those categories gathered from various sources. However, it doesn’t simply dump all news items on your lap, though it may in the beginning. Zite allows you to thumbs up or down articles so that it will know the kinds of articles and topics it will bump up to the top of the list in the future.

Unfortunately, Zite hasn’t been updated since October last year, which isn’t surprising considering it was acquired by Flipboard, which we’ll tackle later. The app will soon disappear once Zite is satisfied that it has pushed enough of its features and technology into Flipboard. That said, Zite still has a loyal following and some cases, like sharing with social networks and sending to Evernote or Pocket, are adequately handled by Android’s sharing framework itself.

Another old and mainstay news reader is News360, a service that launched back in 2010 with its Android app following in 2011. Like Zite and many other news readers, News360 offers a curated list of topics to choose from. The number of broad categories presented to new users is a bit deceptive, making you think that is has fewer options. However, News360 has a search feature that opens up even more items to choose from. In fact, search is one of the features that it has over something like Zite. You can also search for news, topics, and whatnot, letting you jump directly to the content that matters most to you. One other unique feature you might not find in other news readers of its ilk is the option a Local News category, where you can gather stories relevant to your particular location, either from your device’s GPS or via manual input.

Although updated regularly, News360 is showing its age in terms of appearance. While it might have fans, its semi-skeumorphic design might not win any awards in terms of aesthetics, a topic that our next two contenders will have something to say about.

Of course, Google has its now news reader. And no, it isn’t that odd duck Google Currents, which it replaces anyway. Play Newsstand is both a news reader and, for supported regions, a magazine reader. For our topic, however, we will focus on the more widely available functionality. Again you get the curated selection of topics. This time, however, you can actually choose the news sources from that particular category instead of being presented with a mishmash of various sources. That said, you still can’t add your own source that isn’t included in Google’s list. But since we’re talking about Google here, there is a handy search function to check if it isn’t already there. If you’ve been a Google Reader user, your previous feeds are automatically included in Newsstand.

While the app has the staples of any news reader, like saving offline for later perusal, Newsstand really stands out in its design. As a Google app, it exemplifies Google’s current aesthetics and design language, employing clean interfaces and swatches of colors. It will most likely be updated to Material Design in future iterations.

This app is probably the most popular news reader when it comes to visual design. As the name suggets, Flipboard uses a flip page turning animation to add a bit of fanciness to your reading, almost like a physical magazine, something felt more on the tablet interface than on smartphones. Like other readers, you get to choose your sources from a set of recommended categories as well as sources. However, you can also search for other topics or sites and Flipboard will present to you relevant results that can be added to your collection, ranging from social network feeds to RSS, if any.

Perhaps one of the key features of Flipboard, aside from its fancy animation, is the ability to create your own magazine by gathering articles from your various sources. This gives users an easy way to share with others the things they care about in bulk and in a visually appealing way. It is, however, a bit more confusing to use for first time users, especially those migrating from other readers, as it doesn’t use the same workflow or concepts as other apps, so you will have to invest more time in trying to find your around. It might, however, be worth it.

Another popular app, or more properly platform, is Feedly. In a league of its own, Feedly started off as one of the many Google Reader clients that presented RSS feeds in a prettier way than Reader’s spartan interface. However, when Google tragically shut down Reader, Feedly stepped up to not only catch former Reader users but also to become a platform itself, completely filling in the hole left by Google Reader’s demise. That is why Feedly supports the RSS/ATOM “news feed” formats that lets you add arbitrary blogs and websites to your list. That said, it still offers an Explore functionality that lets you browse through its curated categories, in case you were in an adventurous mood.

Feedly can perhaps be considered a power user app, offering a lot more options ranging from default saving tool to the visual presentation of content. As a cross-platform service, Feedly has the advantage of having other third-party clients meet the needs or aesthetic bents of users on other devices or operating systems. One thing that it doesn’t have that apps like Zite and New360 offer is learning capability. It doesn’t rank articles for you and just presents them as they come. In short, you are in total control of what you get, which is just what some users might prefer.

There are a plethora of news readers out there, some with their own preferred backend service. We haven’t even covered the custom news readers that specific to OEM’s like Samsung’s Flipboard-powered My Magazine, HTC’s BlinkFeed, or Sony’s Socialife News.