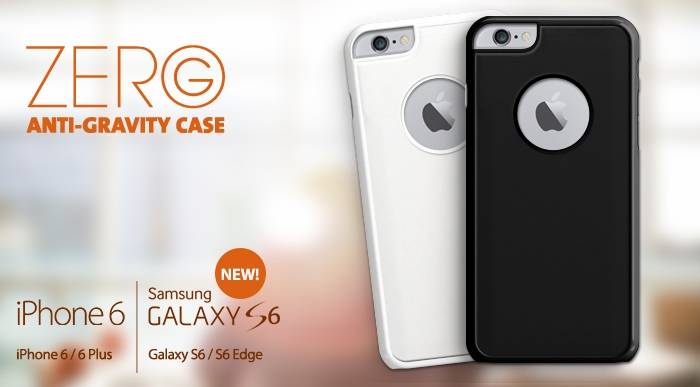 You know you want to take group selfies (otherwise known as groufies) but you’re too embarrassed to have your arms showing in the picture, which makes it very obvious that you were groufie-ing (if you care about those kinds of things). If you have a brand new Samsung Galaxy S6 and Galaxy S6 edge, you’ll know be able to take hands-free selfies with a Kickstarter project called Zero G Anti Gravity Case.

But don’t worry, taking groufies is not the sole purpose of this accessory, although it might be the first one to come to mind. You can stick the case (with your smartphone of course) on to any surface, including glass, tile, stainless steel, mirrors, countertops, white boards, computer screens, windows, and even some smooth-surfaced walls. While it just adds 3mm to your smartphone’s thickness, the case seems to be durable, since it has slightly-raised edges to protect your screen, and has grip-friendly edges as well. The case has a nano-suction material, which makes it stick to the surfaces and “defy gravity” for you.

So aside from taking photos for you, what else is the purpose of the Zero G Anti-gravity case? You can put it on your headboard if you don’t have a side table, so it will be easy to turn off your alarm (or this might be a bad thing too). You can stick it on your kitchen cupboard so you can look at the recipe on your smartphone easily. If you’re following a make-up tutorial on YouTube, while actually applying the make-up, then you’d need to stick it to your mirror.

There are a lot of other functions for a smartphone case like this, and it seems a lot of people agree with that too, as they have more than tripled their target funding and with still 10 days to go. You just need to donate at least $39 to be able to have the Zero G Anti Gravity case, with the estimated retail price being $49.99. Delivery is estimated by June 2015.