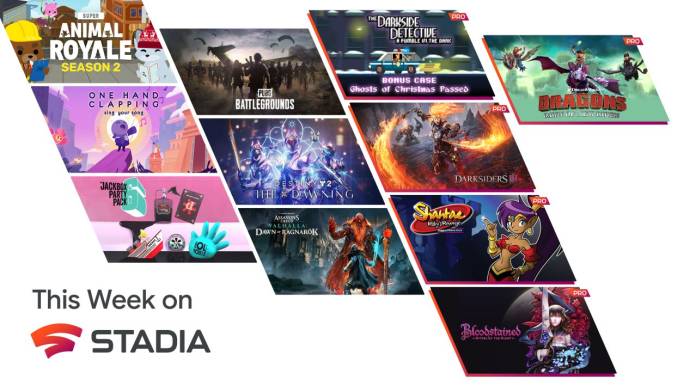 New year is on the horizon and the perfect opportunity for Google to bestow its loyal Stadia members with new and exclusive titles to enjoy. As a month ender ritual, Stadia is due for a fresh announcement pertaining to the titles and vital inclusions coming to the platform. New Year makes this announcement extra special, and the sizeable list of games coming free for Stadia Pro members this time around will please all the online gamers without a doubt.

Starting January 1, 2022, Pro members will have access to the two most anticipated games such as the Darksiders 3 action RPG and Bloodstained, which is a Metroidvania-themed title on the lines of Castlevania. These will be the hot games on everyone’s list, and apart from these two, five new games in total will be added to Stadia Pro next month.

The other three being – Shantae: Risky’s Revenge, Darkside Detective: A Fumble In The Dark, and DreamWorks Dragons: Dawn Of The New Riders. All these titles will be up for grabs beginning the morning of the New Year – 9 AM PST on January 1.

Google also revealed the arrival of Jackbox Party Pack 6 which is now available on the Stadia Store. This bundle includes five multiplayer titles which can be played on smartphone or web browser. The games include Trivia Murder Party 2, Dictionarium, Push The Button, Joke Boat, and Role Models.

The outgoing titles from the cloud gaming platform include Cthulhu Saves Christmas going on December 24, Figment on December 31, and Street Power Football and Mafia III on January 1. That takes the total count of games to 45 titles, and you can claim these titles with Pro membership before they’re gone for good.

Good news for PUBG lovers, as the battle royale title PUBG: Battlegrounds will be free to play from January 12 – joining the likes of Destiny 2 and Crayta which can be played on Stadia. Alongside, Google has also announced the expansion pack for Assassin’s Creed Valhalla which will come at $40 and grant access to The Twilight Pack gear.