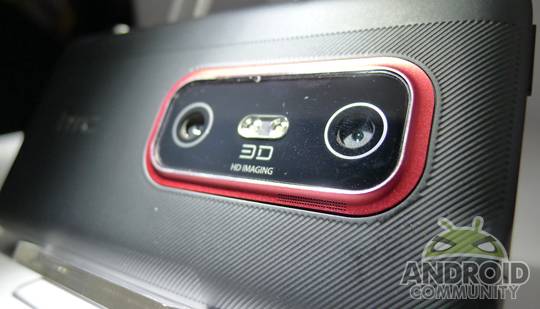 While we’re still waiting for a release date, Sprint and has decided to tease us with a few new details about the HTC Evo 3D. The dual-core, glasses-less 3D featuring phone is launching on Sprint’s 4G network sometime this summer, and now we’re starting to get a better idea of what sort of content we’ll have to take advantage of that 4.3″ 3D screen.

The Evo 3D (see our hands on from CTIA here) is set to be the first major Android smartphone to feature the stereoscopic, glasses-less 3D. Being the first of its kind, one would think it would be a bit lonely in the content department, but Sprint is seeing to it that doesn’t happen. To give you something to do right away, Sprint’s going to be including The Green Hornet in 3D on the pre-packaged SD card with all phones, at least for its initial release. You’ll also get a demo of a 3D Spiderman game, courtesy of Gameloft. 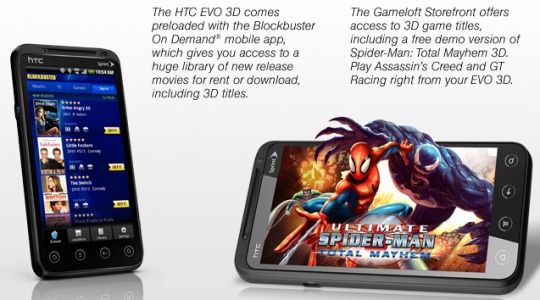 Once you get bored with the pre-loaded content, You’ll be able to bring your money to HTC’s Watch movie store as well as a Blockbuster On-Demand app which will rent, and sell you 2D and 3D movies. Should you be more of a gamer, Sprint has you covered. Gameloft will also be bundling a store app. Gameloft Storefront, as it will be called, will offer several promising sounding 3D games including an Assassins’ Creed title. If you can stand the wait, it sounds like Sprint has every intention of making sure the Evo 3D is a worth successor to the giant it follows.

OVERLAND PARK, Kan. (BUSINESS WIRE), May 31, 2011 – Missed seeing “The Green Hornet 3DTM” and other 3D films at the movie theater? Maybe you are a gamer looking for more action with your favorite game? Today, Sprint (NYSE: S) is offering a sneak peek into some of the exciting content, including movies and games, that will be available on HTC EVOTM 3D, when it launches this summer.

Available this summer exclusively from Sprint, HTC EVO 3D is built on AndroidTM 2.3 (Gingerbread), and powered by a 1.2GHz Qualcomm® Snapdragon® dual core processor. It also features dual, rear-facing 5-megapixel cameras, which can be used to capture both high-quality conventional and stunning 3D images and videos, opening up new frontiers for user-generated content, social networking and streaming video. The device also offers video chat capabilities through a front-facing 1.3-megapixel camera.

“When HTC EVO 3D launches this summer, it will introduce our customers to exciting new capabilities that will appeal to consumers,” said Steve Elfman, president-Network Operations, Product and Wholesale, Sprint. “When combined with Wi-Fi and the Sprint 4G Network, HTC EVO 3D offers an innovative user experience that will give our customers the ability to play games, watch movies, take pictures and video chat in 3D right in the palm of their hand.”

For a limited time, Sprint will be offering customers who purchase the HTC EVO 3D the blockbuster movie “The Green Hornet 3DTM.” The movie will be pre-loaded on the device’s microSD card out of the box.

HTC EVO 3D will be pre-loaded with the HTC WatchTM movie application. With HTC Watch, consumers will have access to 2D and 3D movies and television programming on demand. Customers can buy or rent and download movies that will be optimized for viewing on HTC EVO 3D. Additionally, up to five movies can be stored in the HTC cloud, and programming purchased through the HTC Watch application can be viewed on other HTC devices. Rentals range in price from $2.99 to $3.99, and purchases start at $8.99.

HTC EVO 3D will be the first 3D handset pre-loaded with the Blockbuster On Demand® mobile app offering access to one of the largest catalogs of movies, including 3D titles. This movie store in your pocket offers video optimized for viewing on HTC EVO 3D’s 4.3-inch screen and offers the hottest new releases on the same day they become available on Blu-ray and DVD. Customers can buy or rent titles digitally and download directly to their smartphone, including select 3D movies. Drive Angry, starring Nicolas Cage, will be one of the first action-packed 3D titles available to customers.

Rentals range from $2.99 to $3.99 each, and purchases are $4.99 and up. If a video isn’t available digitally, Blockbuster also gives customers access to more than 100,000 movies and TV shows, as well as games, through its by Blockbuster® by Mail service and Blockbuster stores nationwide. With the HTC EVO 3D, customers can manage and update their mail queues from their phone, while on-the-go.

With 3D animation from HTC EVO 3D, gamers will feel like they are part of the action. A free Ultimate Spider-Man: Total Mayhem 3D demo version of the game will be pre-loaded on HTC EVO 3D. Gamers will enjoy the sleek graphic style with bold colors and impressive animations, including slow motion that brings the ultimate Spider-Man universe alive right in their hands.

With its 3D HD (720p) video capture, 4G speeds where available and the latest version of the acclaimed HTC Sense experience, HTC EVO 3D makes it possible to become part of the action and then easily and seamlessly post and view high-quality 3D video to YouTubeTM or Facebook®, or share moments in real time over the Internet live, via Qik. The 3D content will automatically convert to 2D if the viewer does not have a 3D capable device.

Learn more about the HTC EVO 3D by visiting www.sprint.com/evo3d.

A Sprint developer guide for HTC EVO 3D will be available on the Sprint Developer website at launch. The developer guide will provide details and information on how to take advantage of the unique hardware and software capabilities, including 3D, HDMI output and DLNA on the Sprint Network.