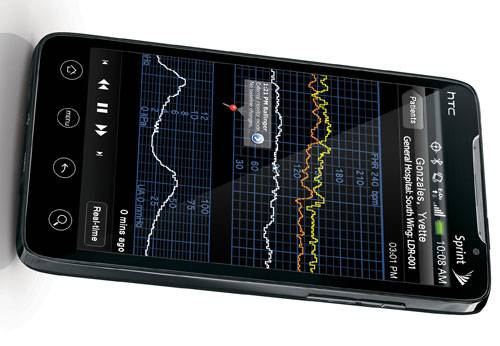 Smartphones appeal to consumers, they also appeal to pro users as well, and as such there tend to be apps that are aimed directly at both user groups. Sprint has announced a new partnership with AirStrip Technologies that offers a very appealing feature for doctors on the Android EVO 4G or Epic 4G smartphones.

The new app is HIPAA compliant and has been cleared by the FDA. The app allows the doctor or caregiver that is monitoring a patient to get the vital signs that are typically only viewable for monitors on a hospital ward or in the room directly on their Android smartphones. That data includes things like EKG readings, blood pressure, and more.

While Sprint is announcing this new feature, AirStrip points out that the service will be offered to physicians on other carriers and with other devices as well. None of the patient data is stored on the phone so if it get slots or stolen there is no risk of personal information being lost.