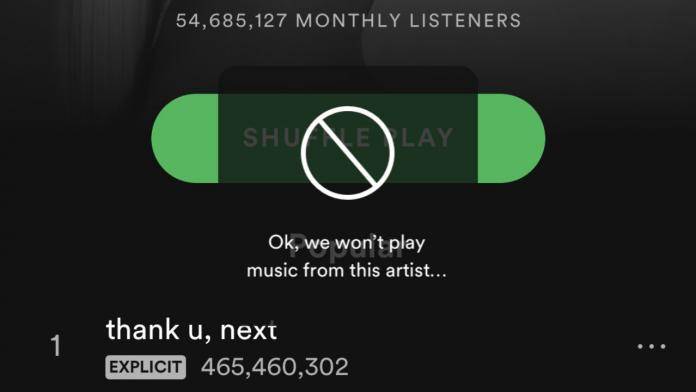 No matter how great the algorithm of a music streaming service is, there will probably be times when an artist that you really don’t like will still show up on a playlist or radio station. There has been no way for you to explicitly indicate that you don’t want a song from a specific artist to show up anywhere in the service. Well that will soon change for Spotify users as it looks like they are now testing a feature that will allow you to “block” certain artists so you won’t ever hear their songs again on the platform.

Having the ability to block artists is a much-requested feature from users and it looks like they’re finally caving in. Initially back in 2017, after “serious consideration”, they refused to introduce such a feature, but now it seems like they gave in. When the update finally arrives, you will be able to block music from any artist that you choose all throughout the app, including automatically curated playlists like Discover Weekly and Daily Mixes, as well as global charts.

The idea of blocking an artist can seem ridiculous to some but for those that really don’t like a specific band or singer, it’s a welcome relief to not have any of their music unexpectedly show up in playlists and radio stations. Just go to the artist’s page, tap on the menu and you’ll see a “Don’t play this artist” section. Once you tap it, you won’t see it anywhere on Spotify and you won’t be able to manually play them either.

In case you change your mind about the artist, you’ll have to go to their page and “unblock” them in order to start hearing their music again. The block feature doesn’t include tracks where they are a featured artist but hopefully, Spotify’s algorithm understands you enough that you really don’t like that artist.

This new feature seems to be rolling out to beta iOS users only for now but if everything goes well, then you’ll have it available on your Android app soon as well.