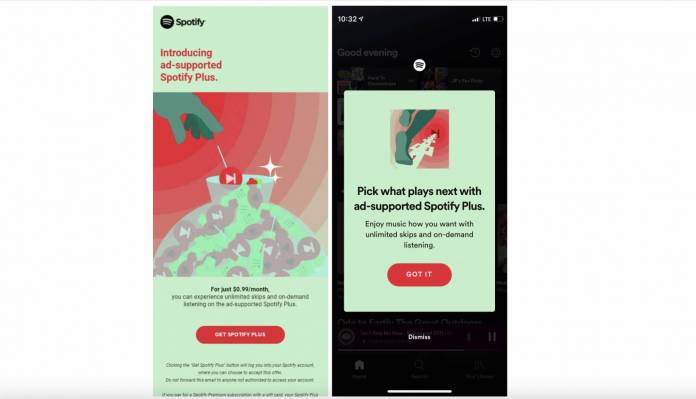 It looks like the trend now for streaming services is to test out cheaper tiers that can give users some benefits but not as much as the regular tiers. We talked about an experimental YouTube Premium Lite tier and now it looks like Spotify is doing something similar. Spotify Plus is a low-cost but ad-supported subscription tier that will have some of the premium benefits. The music streaming giant has confirmed that they are randomly offering it to free users who may be willing to pay $0.99 every month.

The free tier of Spotify is probably its most popular one despite its limitations as compared to the Premium tier. You can only skip six trackers every hour and you can only listen to specific tracks from 15 playlists. Otherwise, you can only listen to shuffled tracks on the albums and playlists that you listen to. And of course, you have the ads that sprout up every few minutes or so which may disrupt the musical grove you’re in.

The Verge shares that some users have spotted a new tier called Spotify Plus being advertised where you have to pay $0.99 only per month. This is just one-tenth of the standard $9.99 Premium tier so some may find this deal attractive enough to subscribe to it. You will still get the ads of course but there are no limits to how many tracks you want to skip. More importantly, you can pick specific songs that you want to listen to.

Spotify confirmed that they are indeed testing it out as they routinely do this to get information before they make decisions on offering new tiers or features. “We’re currently conducting a test of an ad-supported subscription plan with a limited number of our users,” a spokesperson said. But of course, since this is still a test, if they do decide to officially roll out the tier, it may not look like the current form. The purpose of a random test is to get feedback and learnings before they craft the final product.

It looks like you can’t “force” your account to have Spotify Plus so you’ll have to wait if you’re one of the users that they will randomly test this on. We’ll update you if ever this becomes official but don’t hold your breath just yet.