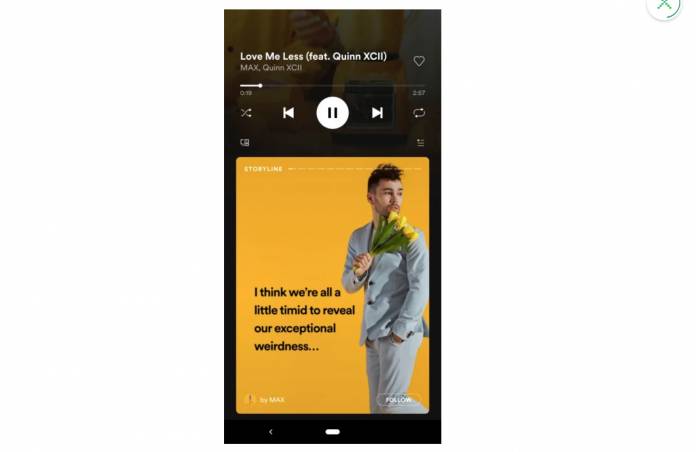 Spotify thinks it’s not just enough anymore for you to be listening to your music on their app. They now believe you want to learn more about the artist or song that you’re interested in. While they’ve had a “Behind the Lyrics” feature for a while now, it looks like they’re testing out a Stories-like feature called Storyline which will allow the artists themselves to share some trivia or behind the scenes information about the song or their music in general.

Just like what you see in your Stories on Instagram or Facebook or Snapchat, the Spotify Storyline shows horizontal lines at the top of your screen while you’re playing a song and you can tap through them on your own or let the screens play out while you listen. You’ll see an indicator at the bottom of your screen that will indicate the song has a Storyline and you can tap anywhere on the screen (as long as it’s not a button) to reveal the story and then tap your way through it.

The Storyline currently contains text, images, or just simply lyrics of the song. Unlike the Behind the Lyrics feature which pulls from Spotify partner Genius, this seems to be something that the artist or their management will be able to update. However, since they’re still in the testing phase, there’s no direct way for them to contribute yet to the stories. Only those that are part of the test are working with Spotify directly.

It’s a bit confusing though for users who are part of the test as the Storyline works on top of Behind the Lyrics. The latter has been criticized by some users and artists of being outdated and so might be providing wrong information about the songs and the artists. Letting the artists and management be part of the former might be the solution and will have value-added content for the music streaming service.

According to Tech Crunch, the Storyline is found in some songs like Jonas Brother’s Sucker and some of Billie Elish’s songs. A spokesperson from Spotify also confirmed that they are indeed testing out this feature “to create better experiences for more users”. They didn’t give a timeline though as to when to expect a stable version.