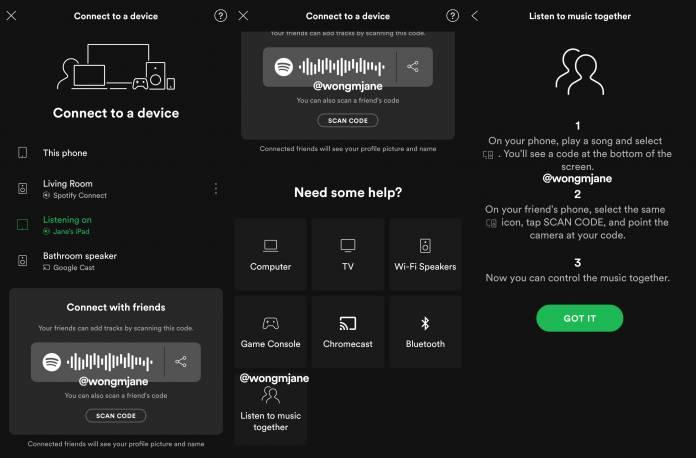 If you’re having a house party and everyone wants to chime in on what music is playing in the background, it can be a hassle to connect with the WiFi or even connect with the smart speaker system that you’re using. Spotify thinks it may have found a solution to that specific problem as they seem to be testing out a feature that would let your friends connect to your Spotify and have some sort of control over the music that will be playing.

While they seem to be testing it out internally initially, noted tipster Jane Manchun Wong seemed to have gotten hold of some screenshots and shared them on her Twitter, according to Android Police. In the connected devices menu, a new box appeared that said “Connect with friends”. You have a unique code which your friends can scan or you can share a URL with them. Your friends’ names will appear in the box as they start to connect and it says you can “listen to music together”.

What is unclear at this point is how listening together will actually work. Can they just add songs to a queued playlist or can they just immediately switch to a song, album, or playlist that they want to listen to right now? Can they also skip or go back to a previous track or toggle shuffle and repeat options? What is it really called, “connect with friends”, “social listening”, or “group session”?

The last one is because another tipster was able to see a new thing while trying to connect to a Sonos speaker. It had a “Start a group session” option that seems to function like the earlier screenshots since it also asks your friends to scan your code. The “connect with friends” phrasing is gone and the share button isn’t there anymore as well. The look of it seems also different from what was shared earlier.

Now we don’t know if Spotify is trying out several different looks and names. We also don’t know if they’re alpha testing it with random users or if it was just an error on their part. We’ll find out soon enough if they do ever roll something out in the next few weeks or months.