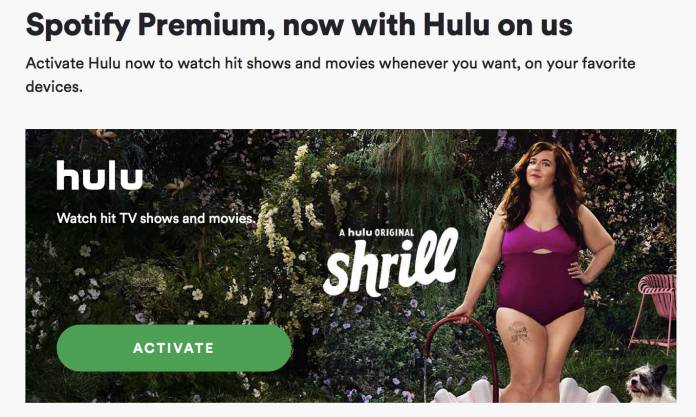 When Netflix decided to raise its prices, not a lot of people were happy. This provided an opportunity for other streaming services to try and get these unhappy customers over to their side. Hulu is one of those rival brands and now it looks like they’re also making a play for music lovers as well. Spotify Premium now comes with a Hulu subscription at no extra charge but if you want to get it, you’ll have to do as soon as possible as it is a limited time offer.

Last year, they offered a Spotify and Hulu bundle which gave subscribers a discounted membership to the latter. It cost $12.99 which was just $3 more than the usual $9.99 per month Spotify Premium subscription. But now they’re offering the Hulu service for free with the premium subscription at still just $9.99. For those who got the bundle, they will be shifted to this new promo and just pay the Spotify Premium cost.

The Hulu subscription however is the one that’s ad-supported so expect to see some ads in between videos and even in the middle of some. They have an ad-free subscription but that is more expensive and that’s not the one that’s part of the Spotify bundle. This deal is available for both new and existing Spotify subscribers. If you’re a new one, you get thirty days free access which already includes Hulu.

However, this is not a permanent deal of course. They say that the offer will be until June 10, 2019 or until “supplies” last, although we have no idea what the supplies mean and how many they have allotted. They should be able to get as many subscribers locked in before Apple announces their new video streaming service later this month.