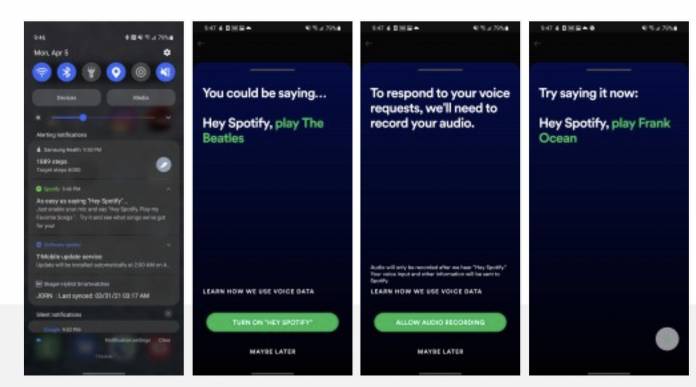 While you probably already use either Google Assistant or Bixby (or Siri) to start playing your music or podcasts on your smartphone, Spotify is now officially announcing that they have come up with their own voice assistant that you can use to control the app hands free. “Hey Spotify” is the new phrase you have to say to get the voice-controlled experience that they are launching so that users will be able to “start, navigate, and search for their music and podcasts.”

Spotify shared in a blog post what are the 5 things that you need to know about “Hey Spotify”. Well, if you have it already as they have only started rolling it out. Basically, once your app has been updated to the version that has this, you just go to the Search section and tap the mic icon that should be there. This means you give Spotify permission to record audio or access your mic. Then all you have to is say “Hey Spotify” followed by what you need it to do or play and you should be all set.

Basically you’ll be able to access Spotify Voice from anywhere within the app so you can just say something like “Hey Spotify, play Taylor Swift songs” or “Hey Spotify, play the latest episode of This American Life podcast” and you should be able to get what you want. You can ask it to play songs, artists, moods, and genres. And if you’re more into podcasts right now, you can ask it to play your favorite shows as well.

As for the privacy concerns, the app will only begin picking up what you’re saying when you say the trigger phrase, “Hey Spotify”. The app will also indicate either through an in-app visual or audio tone when it’s receiving your input. The app will be on standby though, listening for your trigger phrase “in short, few-second snippets” but if it doesn’t hear the phrase, it will delete the recording. You can read more about it in the voice controls policy section.

But if you don’t want to use this feature, you can turn off “Hey Spotify” or disable the voice feature completely from the Voice Interactions section in the Settings. “Hey Spotify” is rolling out to Android (and iOS) users in the US but not for everyone just yet. They promised to roll it out widely in the next few weeks.