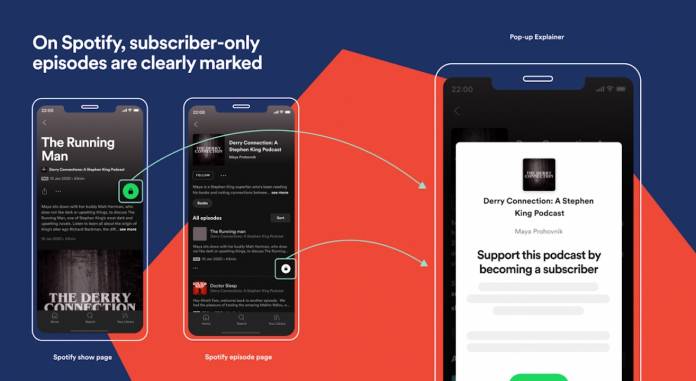 Spotify has become more than just a music streaming service but they have also fully embraced the world of podcasts. Previously, they have also said that they will be bringing more monetization options for podcast creators so they will be able to take advantage of the more than 345 million monthly listeners on the platform. They have now started rolling out a paid subscription platform for podcasters as well as tools to help them create more content to fully utilize this monetization option.

The paid subscription will be rolling out through the podcast creation tool Anchor that is also owned by Spotify. When they create their podcasts on Anchor, they can mark all or specific episodes as subscriber-only before they publish it on Spotify and other podcast platforms. The great news for these content creators is that for the first two years, Spotify will not get any commission and so 100% of revenues will go to the creator. But by 2023, Spotify will be getting a 5% fee.

At launch, there are 12 independent podcasters that will be part of this paid platform. They will also be opening up submissions from those waitlisted in the next coming months. The subscription cost for consumers will be in three tiers: $2.99, $4.99, or $7.99. More details on the consumer end will probably be released later on. Spotify is also collaborating with NPR to have some sponsor-free episodes for paid subscribers to encourage people to sign up later on if they like the content.

Another thing that Spotify is working on is to let listeners who have subscribed to certain podcasts on other platforms to also be able to access the content on Spotify through their existing login information. The Spotify Audience Network is also rolling out so advertisers will be able to connect to the audience that they want through the various podcast content on the platform.

The paid subscription platform will start rolling out in the U.S and later on to other territories. The Spotify Audience Network will open up to select independent creators starting May 1 through Anchor as well.