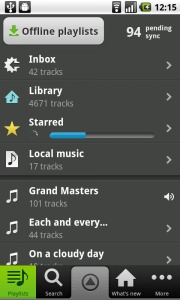 Spotify has pushed out a new version of their Android media player app, complete with high-resolution graphics to suit large-screen devices such as the Samsung Galaxy Tab, and performance boosts that reduce time between tracks and other lag. The company now reckons the app will work on “almost any screen resolution, rotation and density, even tablet resolutions.”

Spotify for Android is a free download from the Android Market, though you’ll need a premium account with the service in order to use it. Changelist below.