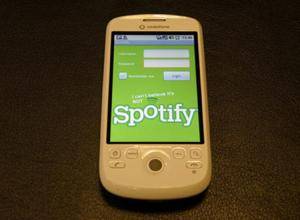 The majority of smartphones on the market are capable of playing music today. The devices are replacing dedicated MP3 players for many users as more devices converge into the smartphone feature set.

The app is called Droidify an allows the user to synchronize playlists over Wi-Fi or 3G. The app lacks offline playback though. The app is on the Android market right now, if you want to grab it ahead of the official Spotify app’s introduction.