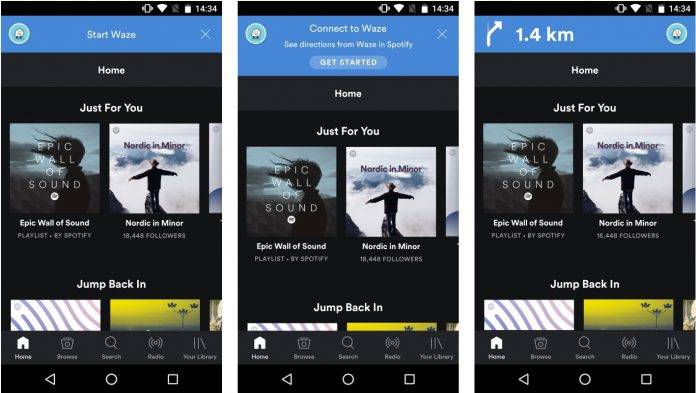 This has probably happened to you at one point in time. You’re listening to your favorite song on Spotify and singing your heart out to it, when suddenly your Waze default voice interrupts your groove and tells you to turn right at the next intersection. While it is of course important to know the directions to where you’re going to, it’s also annoying that it had to interrupt your sing-along. Well the two apps have announced a new partnership so this kind of thing will never happen again.

This partnership is exclusive to Android users only so you will have something to lord over your iOS using friends. You will not need to switch screens in either of the apps if you happen to be using both at the same time. From within Spotify, you will now be able to navigate to wherever you’re going, powered by Waze of course. And the great thing about it is that you do not need to have your music interrupted as it will seamlessly give you directions.

If you’re on the Waze screen, you will still be able to access your Spotify playlists from within the app and even change the tracks from there if the song currently playing doesn’t really fit your mood at that time. If you’re driving, you shouldn’t really be looking at your smartphone while you’re moving. But when you’re at a complete stop and you need to switch between the two apps for some reason, you only need to tap once to do so.

You would have to update both your Spotify and Waze apps to enjoy this new synergy between the two. If you don’t have an Android smartphone, then that’s too bad for you as it is exclusive on this platform, at lest for now.