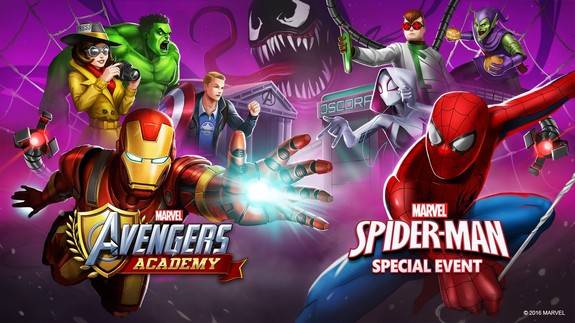 Spider-man “coming home” to the Marvel Cinematic Universe was one of the biggest things about Captain America: Civil War. And the upcoming new Spidey movie, appropriately titled Spider-man: Homecoming is one of the most highly awaited films of 2017. But for now, you can content yourself with seeing the arachnid-bitten superhero make its way to your Android devices as Peter Parker and his more agile alter ego enrolls in the Marvel Avengers Academy mobile game and brings even more action (and trouble) to the school.

This is actually a limited-time in-game event which will be available once you update your Marvel Avengers Academy game. After the events of Civil War, when Tony Stark “discovered” Parker, the latter is now an intern at the former’s Stark Industries. But when The Osborn Private Science Institution suddenly opens beside the Avengers Academy, Spidey smells something fishy and with just cause, as Normal Osborn and Doctor Octopus are actually creating gadgets and machines to take over S.H.I.E.L.D.

Peter, now interning as well in The Daily Bugle satellite office at the Academy, will have to team up with his Super Hero crew to defeat the Sinister Six led by the Green Goblin (Osborn of course) and Doc Oc. The more you play the game, the more points you earn of course and you also get to unlock more characters. And you will also be able to earn a free download of the first five episodes of the new Marvel’s Ultimate Spider-Man series. You’ll see the redeem button when you unlock these new characters so you can be redirected to where you can download the eps.

You also get the chance to win an all-expense paid trip to the premiere of the Spidey movie next year. Just update the Marvel Avengers Academy app and play the Spider-man event to be able to enter the raffle.