The Sony Xperia XZ Premium directly competes with the Samsung Galaxy S8. They both run on a Snapdragon 835 processor but the latter has a version powered by an Exynos 8895. Tech Trinkets happened to do a Speed Test to compare the two with different processors. Before watching the video, we’re betting on the Samsung Galaxy S8 although the reviewer on the video was rooting for the XZ Premium.

In booting up the smartphones, the Samsung Galaxy S8 was ahead. Tech Trinket noted that Sony could improve on that although it’s not really far behind. The speed test was mainly to check the performance of the phones having different processors. Both phones are no doubt fast, loading almost at the same time in most of the basic apps. Sony was a little bit faster though when opening the photo gallery.

When it comes to mobile games, the Sony was ahead at first when opening Super Mario Run but Samsung quickly caught up and even went ahead of Sony. In some others games, loading was faster on the Xperia XZ Premium but only slightly faster by a few seconds. Launching GTA was faster on the Qualcomm phone. It looked snappier on Samsung but we can say that some games load better on Qualcomm. 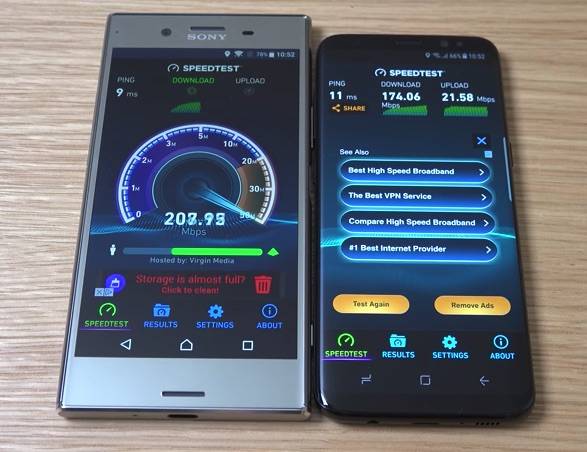 Checking out the WiFi speed on Speedtest, Sony reached 23Mbps upload speed while the Samsung phone only reached 21Mbps. As for web browsing, both loaded pages almost at the same time but with Samsung loading the pictures faster.

There really is not much difference between the two but it’s obvious that Samsung is better than memory management. It reloads faster but again, only slightly speedier.

The Sony Xperia XZ Premium and the Samsung Galaxy S8 are neck-to-neck in terms of speed. Both are great choices and both are worth their premium prices. Speed won’t be a problem because both processors delivered impressive performance.