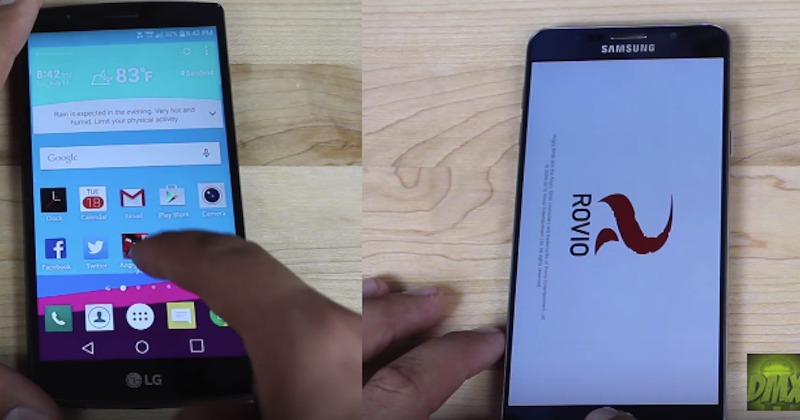 Brutal drop tests are welcome even if they are heart-breaking to watch because we can still learn a thing or two from them. For those Android fans who are only interested in how fast new smartphones are compared to others, rely on speed tests. As for the Galaxy Note 5, the new premium flagship smartphone was recently compared with the LG G4.

DroidModderX ROOT Master just published a speed test video on YouTube, showing us how fast the two are. The LG G4 on the left and the Samsung Galaxy Note 5 on the right— you’ll see the phones opening some stock apps with the timer running in the background.

The Note 5 takes the lead a little bit but when the new ‘Angry Birds 2’ game is opened, things started to slow down for both units. The Note 5 opened the game first with the LG G4 taking some time. The new Note phablet won the first round, clocking in at 42 seconds.

However, during the second lap of the test, where the phones are required to reload the same apps, the LG G4 did better, perhaps thanks to the home screen button. The G4 was really flying, opening the same apps quickly while the Note 5 was reloading every application every single time.

For a time, the Note 5 was stuck on the same Angry Birds game. This round, the LG won at 1:18 seconds while it took the Note 5 1:22 seconds. When it comes to first booting applications, the Note 5 is faster compared to the G4 but when reloading those same apps, the Note 5 takes some time. Meanwhile, the LG G4 smoothly breezes through the apps mainly because the phone keeps them running the background.

So which one is the clear winner? For me, it’s a tie. Round 1 for the Samsung Galaxy Note 5 and Round 2 for the LG G4.

Which one is faster for you?