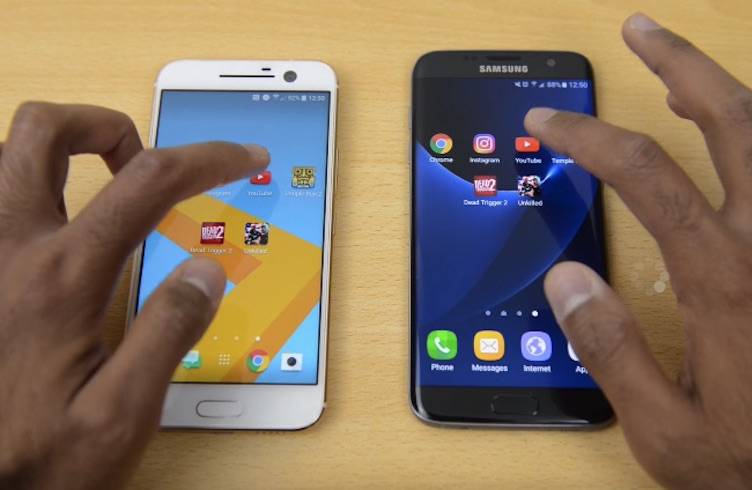 We’re only interested in speed tests of the latest premium flagships like the Samsung Galaxy S7/S7 Edge, LG G5, and even the non-Android iPhone 6. We have yet to know if the new HTC 10 can live up to its many promises and if it can finally compete with the phones we mentioned even before Apple releases the iPhone 7. Not that we care if the next-gen iPhone will beat the Android devices but we’re curious if the latest flagship devices are worthy upgrades. That’s all we want know–if these new Android phones are worthy of our attention and hard-earned money.

The HTC 10 especially has been the talk of the town since it was launched. For one, HTC has been hyping up marketing as usual. We said it’s a cool reboot of One M7 with its hi-res audio and world-class OIS selfie camera. Finally, somebody took the time to test the speed of the HTC 10 side-by-side the Samsung Galaxy S7. Watch the video below:

The phones tested were the Snapdradon 820 4-core, 4GB RAM version of the HTC 10 and the Exynos 8890 8-core powered, 4GB RAM variant of the Samsung Galaxy S7. Both phones have been upgraded to the latest versions of Marshmallow which is Android 6.0.1. Initial scores tell us that the Samsung Galaxy S7 is faster. The video footage has been slowed down to speed x0.2 so we’ll see the action clearly.

Opening YouTube, the content that loaded on each phone is different from the other. Opening the Assassin Player trailer, it’s faster on the HTC 10. Launching the Temple Run game on both phones, it’s obviously faster on the Galaxy S7 while it’s taking some time on the HTC phone. Opening another 3D game, Dead Trigger 2, it opens and loads first on the Galaxy S7. ‘Unkilled’ also loads faster when opened. Multi-tasking is good between the two while reopening the apps are pretty much the same with very small differences.

The results tell us that the Samsung Galaxy S7 is indeed faster especially when launching those games. We somehow expected that but at least we know the HTC 10 is on par with the Galaxy S7.