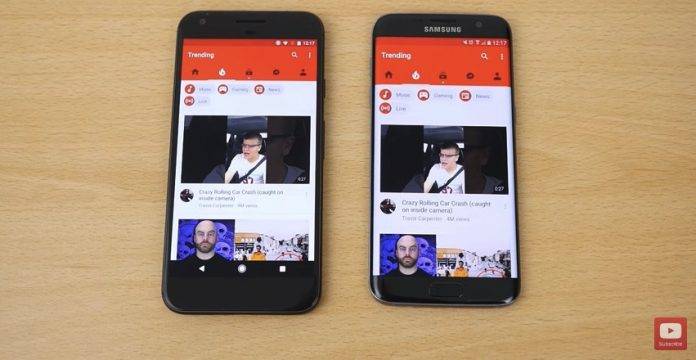 The Google Pixel XL, aside from its smaller sibling and the LG V20, is one of the latest premium flagships recently introduced in the market. Since the Note 7 is no longer a threat, the Google-branded phone is now being compared side-by-side with the S7 edge. The latter is the most recent flagship phone from Samsung before the Note 7 was launched.

The Galaxy S7 edge used here is an Exynos version running Android 7.1 Nougat while the S7 edge is powered by Snapdragon 821 and Android 6.0 Marshmallow. Overall, the two smartphones are fast, showing very minimal difference. In some cases, the Pixel edged out the S7 edge but watching the video below, we can say the old Samsung device is slightly faster when it comes to loading apps.

The devices are neck-on-neck when launching the camera and opening basic to more intensive games. Opening a browser and YouTube is a bit faster on the Pixel phone. When it comes to opening games such as Angry Birds, Temple Run, Subway Surfers, and Dead Trigger 2–the Galaxy S7 edge is faster.

Looking at the benchmark tests, the two are higher in both single and multi core tests but the S7 edge still has the higher numbers. However, multi-tasking seems to be faster on the Pixel XL. We’re not sure if the speed is because of the RAM or the Qualcomm S821 or is it because the device is more recent.