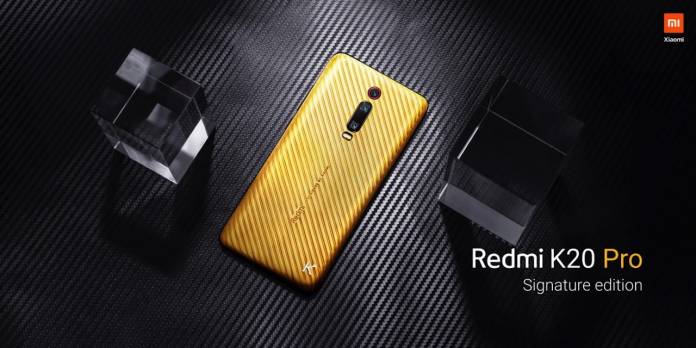 Xiaomi is always busy with new smartphones and smart home products. After the Mi A3 as a new Android One phone and the new Xiaomi CC series, here is a new Redmi phone. It’s been a few months since we noted the Redmi K20 and K20 Pro would be powered by a Snapdragon 855 processor. The duo will follow the Redmi Note 7 series from earlier this year. Redmi India has proudly announced over on Twitter the Redmi K20 Pro. It’s a Signature Edition but don’t expect the device to be gold plated. It’s not.

The Redmi team based in India said they will only be making 20 units of the phone. The limited run of the Signature Edition is expected because the phone is too expensive. We’re not gonna ask who will be willing to shell out that amount because yes, there are many people who can afford such phone.

The luxurious version of the Redmi K20 Pro is definitely premium with the specs and features. We’re not even looking at the gold and diamonds–just the specs. The phone comes equipped with a 6.39-inch screen, Full HD+ 1080 x 2340 resolution, 19.5:9 aspect ratio, 91.9 % screen-to-body ratio, onscreen fingerprint sensor, octa-core Snapdragon 855 processor, Adreno 640 GPU, maximum of 8GB RAM, up to 256GB onboard storage, and a large 4000mAh battery with 27W fast-charging support.

When it comes to mobile photography, you can use the triple rear camera system that’s comprised of a 48MP Sony IMX586 sensor with f/1.75 aperture, 13MP wide-angle lens, and an 8MP f/2.4 lens. The 20MP pop-up front-facing shooter is enough to capture hi-res selfies. Looking at the official images of the Redmi K20 Pro Signature Edition, the Android smartphone looks captivating in its Yellow Gold tone. We can also see the K logo encrusted in diamonds on the lower right part of the rear panel.