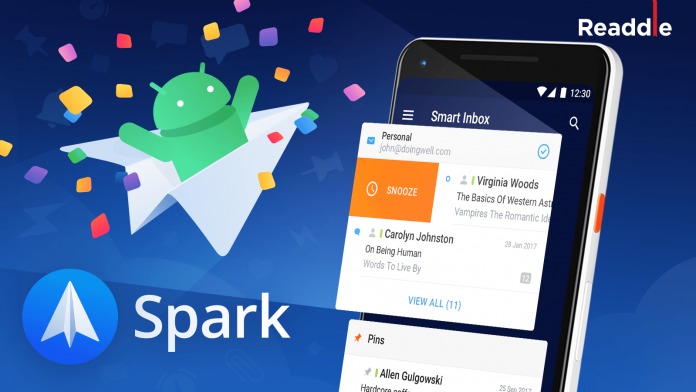 If you’re mourning the loss of the Inbox email app from Google (who really wants you to switch to the Gmail app anyway), we have sort of good news for you. The rumors about a popular and similar iOS app making its way to Android is now officially news. Spark by Readdle has officiallly announced that they are finally launching their Android email app, bringing a lot of the features that has made it an indespenible email app for Apple users.

In a pretty lengthy blogpost announcing its arrival to the Android world, they re-introduced themselves to new users and said that their main ambition is to solve some of the biggest problems that have made email so tedious. This includes having too many emails in a single inbox, the complications of organizing messages according to importance, and also having problems in terms of collaboration.

Spark calls itself distraction-free email since you’ll just receive notifications from senders that are considered “important”. You also have a Smart Inbox that “intelligently prioritizes” the emails that you receive, bringing the ones from “real” people to the top and letting you batch delete those social notications and marketing emails that you probably don’t need.

The app also has some “superpowers” or cutting-edge tools that you can use to make life easier and more customizable. This includes snooze, send later, reminders and follow-ups, pins, smart search, and advanced customization. For collaboration, you will be able to discuss the email privately first with your team and then you will be able to create the email together in real time.

You can now download Spark for Android from the Google Play Store for free. You can expect them to introduce other features in the coming months including 3rd party integrations, Calendar, quick replies, email templates, email delegations for teams.