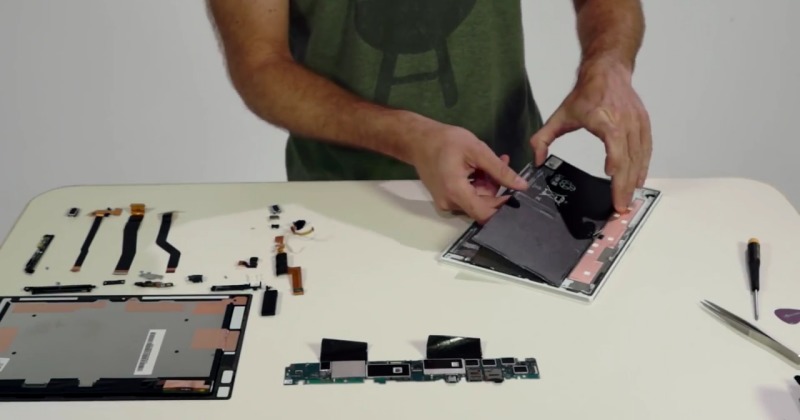 We’ve seen a lot of device teardown videos before, but rare are the tablets that have been put under the knife, so to speak. Even rarer is one that takes on Sony‘s latest tablet, the Xperia Z2 Tablet. Knowing how many hardware fans drool over such things, Sony’s SGNL YouTube channel released a brief overview that pulls, very gently, the tablet apart and puts it back together again.

As Sony did, we will recap the features of this rare Sony tablet. It has a 10.1-inch 1080p screen, runs on a powerful Qualcomm Snapdragon 801 processor and is powered by a generous 6,000 mAh battery. In terms of physical design, the tablet looks very much like an oversized Xperia Z2 smartphone turned on its sides. But while it shares the same IP55/58 dust and water resistance rating of the flagship smartphone, it doesn’t share the same camera prowess, limited to only an 8.1 megapixel rear shooter. But enough with the chatter and on to the dissection!

While many smartphone teardowns start with separating the back cover from the main body, in the case of this tablet the back cover is the main body, so the first step is actually to pry the display and the body apart, held together by an adhesive sealant. Once that is done, the secrets of the Xperia Z2 Tablet are revealed. While most of the ports and entry points on the edge of the tablet are covered with flaps from the outside, the headphone jack isn’t. Normally that would be cause for worry, but apparently, the jack has its own separate waterproof housing. Getting access to the motherboard, which sits on the back half of the tablet is a bit of work, since it uses a board to board arrangement. This means you’ll have to remove and detach almost everything else before it gives up itself. Interestingly, the board reveals that it has used up space for Japanese digital TV components, even on the US version.

This teardown is definitely no iFixit and it doesn’t go into details on how easy, or difficult, it is to take the components apart, nor does it give any hint on how easy, or hard, it will be to send in for repairs. That said, here’s something that most iFixit treatments don’t have: a build up video that puts everything back up and makes it run like nothing happened. Plus a product placement for Verizon, where the Xperia Z2 Tablet will be exclusively available in the US.