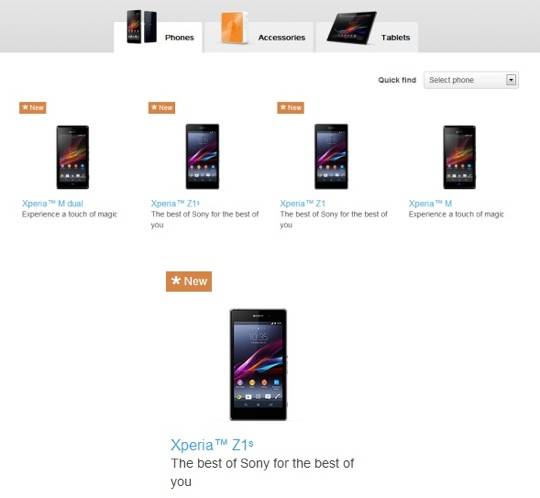 The Sony Xperia Z1S was expected to be announced at a Shanghai press event on November 12th. The catch with that, Sony has yet to confirm which device, or devices they were going to announce during the event. And while Sony has yet to confirm the Xperia Z1S announcement is coming on the 12th, a recent leak certainly suggests that is the device that will be announced.

The Sony Mobile Global Site briefly posted details of the handset. These have since been removed, however the handset has been the subject of earlier rumors and as such, the specs have all been fully detailed. Sony is expected to announce the Xperia Z1S with a 4.3-inch 1280 x 720 display and 2.2GHz Snapdragon 800 processor with 2GB of RAM.

Other still rumored specs for the handset include 16GB of internal storage, a 2300 mAh battery, WiFi, Bluetooth 4.0 and a 2.2 megapixel front-facing camera and 20.7 megapixel rear-facing camera. The device should also arrive with the now familiar for Sony, IP55 and IP58 certifications for dust and water resistance as well as Android 4.2.2 Jelly Bean.

Basically, while Sony has yet to say exactly what the “S” in the name stands for, given the leaked specs, that seems to suggest it will stand for “small.” That all having been said, we will be on the lookout for the official announcement coming out of China, and for now, while the handset seems to be all but confirmed, we do have to remember that leaks and rumors can sometimes change.

Thanks for the tip, Anurag