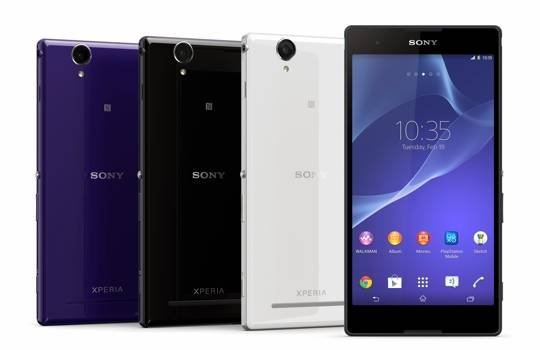 Sony has unveiled their latest “large screen” smartphone. This one has arrived as the Xperia T2 Ultra and it brings a 6-inch 720p HD display. While the size of the display is the key feature here, Sony has also said this handset has been specially designed for emerging markets. Basically, instead of seeing a widespread global release, the Xperia T2 Ultra will be heading to China, Africa, the Middle East and the Asia Pacific rim.

To that point, Sony is pushing this as a device that is going to be a “stunning LTE Android smartphone at a mid-range price point.” Of course, Sony has yet to announce the price for the handset. The Xperia T2 Ultra lineup will include a regular single-SIM model as well as a dual-SIM model.

Some of the other key specs include a quad-core 1.4GHz Snapdragon processor with 1GB of RAM and 8GB of internal storage space. The handset will also have a microSD memory card slot, 3000 mAh battery, 1.1 megapixel front-facing camera and 13 megapixel rear-facing camera. Both the front- and rear-facing cameras will include Exmor, with Exmor R on the front and Exmor RS on the rear.

Users will also benefit from the Sony related software features in terms of the camera. Some of these goodies will include Sweep Panorama, Timeshift Burst, Collage, Portrait Retouch and Background Defocus. Another feature of the Xperia T2 Ultra being pushed by Sony is the NFC. While this may often be associated with thoughts of mobile payments, Sony is reminding users how it is also valuable for accessories including speakers, wireless headsets, televisions and the SmartWatch.

The Xperia T2 Ultra will be running Android 4.3 Jelly Bean at launch and also packed with plenty of Sony specifics in terms of software. These other items come in addition to the camera features and include a STAMINA Mode to help improve battery life, as well as the Album, Walkman and Movies apps.