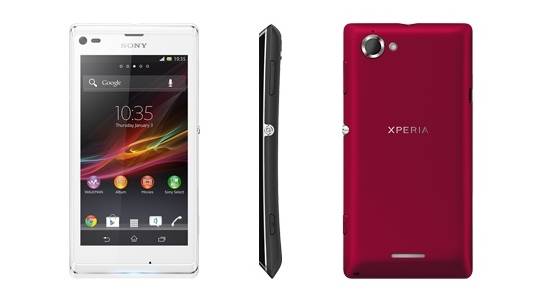 Sony has officially launched another Xperia branded handset for those in the US market. This latest addition is the Sony Xperia L and similar to other recent releases, this one has arrived unlocked and is being sold on a no-contract basis. The Xperia L sports a 4.3-inch display with a screen resolution of 854 x 480 and is running Android 4.1 Jelly Bean.

Otherwise, the specs are not what we would describe as being high-end, however the handset does have a price that matches. The Xperia L has 8GB of internal storage along with a microSD card slot and is powered by a dual-core 1GHz Qualcomm MSM8230 processor with 1GB of RAM.

Those making a purchase can also expect to find the usual array of features including WiFi, Bluetooth 4.0, GPS, NFC and a 3.5mm headphone jack. The Xperia L has a front-facing camera along with an 8 megapixel rear-facing camera. Sony touts the Xperia L as being a “camera lovers’ phone” which seems to be another way of saying the handset has the ExmorRS for Mobile image sensor.

The other bit worth mentioning is the colors — the Xperia L is available in black, white or red. Sony has the Xperia L priced at $349.99 and at present, the store listing is showing an estimated shipping date of May 23rd. Additionally, as we often seen with Sony Store orders, those ordering the Xperia L will get free ground shipping.

Looking back and we have also seen the Xperia Z and Xperia ZL come available for those in the US. Both of those handsets are also selling unlocked and they are each priced at $629.99. Finally, as per what seems standard for unlocked Sony handsets here in the US, the Xperia L has network support for HSPA+ on the 850, 1900, 1700, 2100 MHz bands.