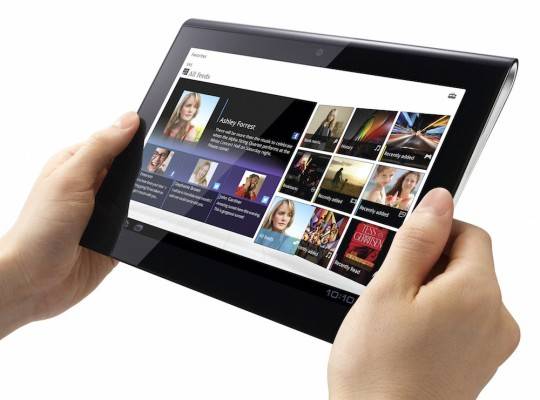 Trying out your shiny new Tablet P on AT&T, only to wish it had an operating system that wasn’t nearing a year out of date? Then you’re in luck: Sony has announced that it’ll be pushing out the Ice Cream Sandwich update to both the Tablet S and Tablet P in April, making good on its earlier promise. The bad news is that it’s only confirmed for Japan at the moment; those with WiFi-only Tablet S machines in the US and elsewhere will have to wait an indeterminate amount of time to get their hands on the update.

The Tablet S and Tablet P both run on an NVIDIA Tegra 2 chipset with a gigabyte of RAM, so the update should prove no trouble for either device. The really interesting thing will be what Sony does with its custom interface. ICS has a great look and feel, which both Samsung and HTC have basically thrown out the window in favor of their own UI skins.  It looks like Sony will follow in their footsteps and adapt the admittedly light changes they’ve made to Honeycomb to ICS as well. This will present some software engineering challenges on the Tablet P in particular, with its dual screens and custom API. New features include the ability to watch content from a Sony Blu-ray player over a home network and “Small Apps”, free-floating widget-style programs that are pretty similar to the “docked” apps on Samsung’s later Galaxy Tab line.

The Tablet S WiFi version should be updated in other territories not too long after Japan gets its update, but the Tablet P is another story. It just launched on AT&T earlier this month sporting Android 3.0 Honeycomb, and any update will have to come through AT&T first. We all know how that story goes; it’ll probably be several months at least before the brand new device is running on current software, it indeed it gets updated at all. Custom ROMs will be difficult, since they might need to be translated from the Japanese version to preserve the custom split-screen changes to Android.