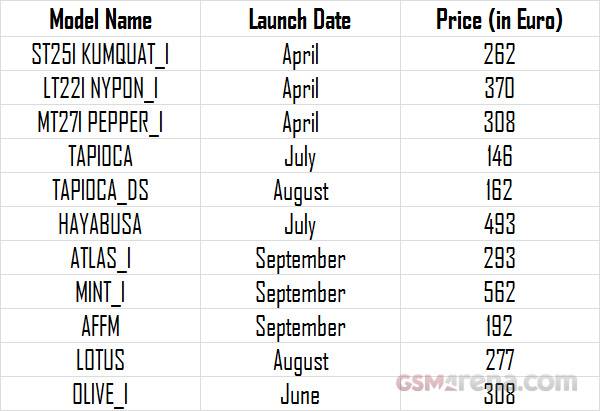 What do we have here? Some juicy information about upcoming Sony smartphones it seems — 11 of them. Today from the folks at GSMarena we now have a full 2012 roadmap that has leaked with a list of Sony’s upcoming device expected launch dates, codenames, and pricing. Obviously this is only a roadmap and many things are likely to change but lets check it out and break down the possibilities.

Sony recently bought Ericsson’s 50% of the company and have also said they’ll be going “all in” with Android in 2012. All of the above phones will run on Android and will receive different names on launch as these are internal codenames. First off the Nozomi, which isn’t listed as it was announced at CES as the Sony Xperia S (see our hands-on below). It will be priced at €462 to give you an idea of its caliber and what we see listed. It’s fair to assume with that pricing that some of those higher priced devices will be flagship phones from Sony.

We aren’t sure what all will come to the US or not as this is only an early leak (or rumor) but Sony has been trying to tap into the US market more as of late. The Kumquat and Nypon we’ve heard before but details are still scant. On the other hand the others are all new to us here at Android Community. I’m particularly interested in the Hayabusa. For one their motorcycles are blazing fast, have style, and are unique. And two, because it has a beefy price along the lines of the Xperia S.

The rest seem to be priced differently to hit different levels of the smartphone market. Then we also have that MINT being the most expensive on the list. This could be their next big thing and is slated for a September release. The last thing I want to mention is the Tapioca_DS. Could this be dual-screen? or maybe dual-sim. Either way they have two Tapioca phones listed.

It’s safe to assume we’ll see the top 3 all slated for an April release at Mobile World Congress (MWC) in Spain late next month. We’ll be there live to capture all the details so stay tuned.