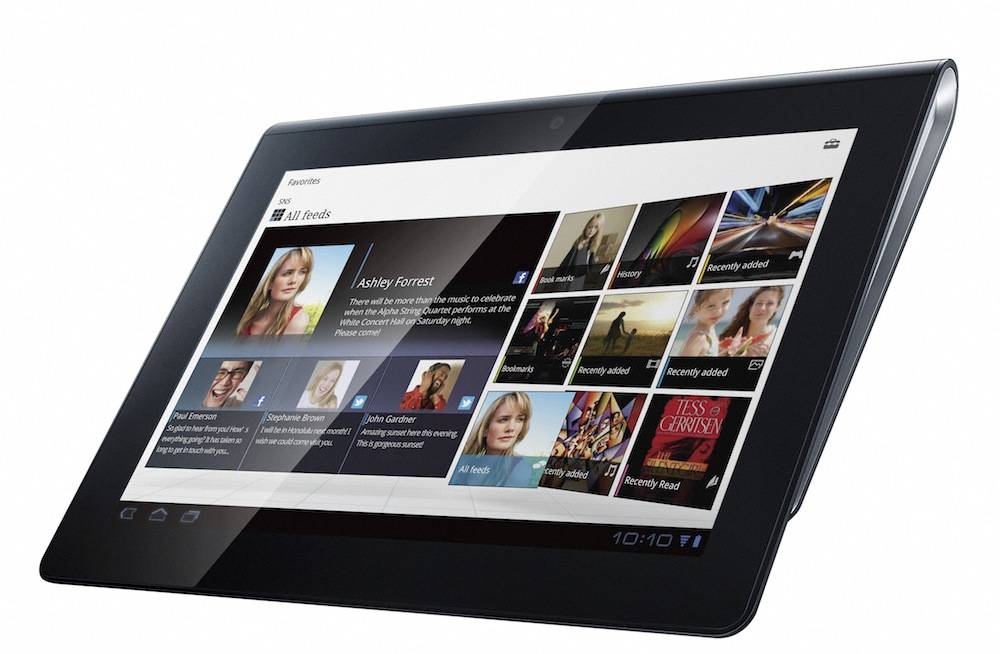 Sony has announced two Android 3.0 Honeycomb tablets, currently codenamed S1 and S2, which it promises are optimized for “rich media entertainment” and “mobile communication and entertainment” respectively. Each set to launch globally in fall 2011, the S1 has a single 9.4-inch touchscreen, while the S2 has two 5.5-inch touchscreens and a clamshell form-factor.

There’s also WiFi and 3G/4G support, depending on region and networks available, while the S1 will also have an infrared transmitter allowing it to be used as a huge universal remote. DLNA support on both models allows users to stream their content to compatible TVs.

The S2 will be able to either spread apps and content across both displays, or show a virtual keyboard or other controls on the bottom panel. There’ll also be Qriocity streaming media and PlayStation Suite gaming to be had, though right now Sony isn’t talking about any more specifications and even the designs you see in these images is subject to change.

Sony Corporation (“Sony”), announces “Sony Tablet” that delivers the perfect combination of hardware, content and network with seamless usability for a high-quality, engaging entertainment experience. Based on decades of engineering heritage, Sony is developing two tablets with unprecedented design, including S1 (codename) which is optimized for rich media entertainment and S2 (codename) which is ideal for mobile communication and entertainment. “Sony Tablet” will become available in the global market starting in fall 2011.

“Sony Tablet” is equipped with the latest Android 3.0 which is designed for devices with larger screen sizes, particularly tablets. Both tablets are WiFi and WAN (3G/4G) compatible and users can not only browse the internet or check e-mail but they can also smoothly access digital content including videos, games and books through Sony’s premium network services and more, on-the-go at any time.

S1 has a 9.4-inch display for enjoying the web and rich content on a large screen. Its off-center of gravity design realizes stability and ease of grip as well as a sense of stability and lightness, offering comfortable use for hours.

S2 has two 5.5-inch displays that can be folded for easy portability. In contrast to existing tablets, its unprecedented dual screen presentation and usability allows its displays to be combined and used as a large screen or for different functions such as playing video on one screen while showing control buttons on the other.

“Android 3.0 is a new version of the Android platform with a new holographic user interface that is designed from the ground up for devices with larger screen sizes, particularly tablets. I’m excited about “Sony Tablet” as it will further spur the development of applications and network offerings which users are looking for.” said Andy Rubin, Senior Vice President, Mobile, Google Inc.

Also, in the mobile computing category, the market for PCs which realize high productivity is expected to steadily grow, particularly in emerging markets. Therefore, Sony will also remain committed to strengthening its VAIO brand and introduce increasingly compelling products which offer new value propositions to the market.

■Designed for portability and intuitive gripping
With its off-center of gravity form factor, the 9.4-inch S1 offers stability and a sense of lightness, offering comfortable use for hours.
The dual screen S2 comes with two 5.5-inch displays which can be used together as one large screen to browse websites and more. They can also be used for different functions as users can watch a video on one screen and input commands on the other, or check email on one screen and use the other as a soft keyboard.

■Remote access functionality with AV devices
Through “Sony Tablet”, users can control home entertainment devices as well as enjoy content in new ways. S1 uses infrared technology and works as universal remote controls for a variety of AV devices starting with . Users can perform functions like turning on their TVs, changing the channel and adjusting the volume. Also, through DLNA functionality on “Sony Tablet”, users can “throw” personal content to large screen televisions or music to wireless speakers.

In 2010, Sony launched a network platform called “Qriocity” which connects many of Sony’s network-enabled devices, and has been expanding its services into global markets. Also, Sony Computer Entertainment has been providing various contents and services for PlayStation users through PlayStation®Network, which now has over 75 million registered accounts (as of March 20, 2011) worldwide.

With the establishment of Consumer Products and Services Group in April 2011, Sony will focus on accelerating the development of innovative next generation products and aim to deliver a new lifestyle by strengthening the integration of hardware and network services.