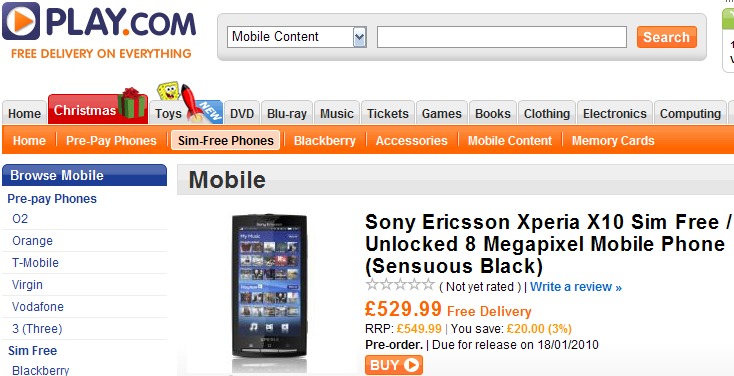 After Sony Ericsson gave us a February 10th 2010 launch date for the UK, and then pulled it out, now there’s someone else giving us a release date. Play.com has posted on their site a “due for release” date of January 18th 2010 for the XPERIA X10.

So, either someone is trying to pull our collective leg, or they know something we don’t, the thing is, we already knew the Sony Ericsson Xperia X10 was coming on the first quarter of next year. We just didn’t have an exact date after Sony Ericsson took the February 10th release date out of the equation.

So, will Play.com pull it out later, who knows, but for now, they have the SIM-free/Unlocked device for pre-order on their site for £529.99 ($863), with a January 18th, 2010 release date, as mentioned before. Well, those who want to get this Android-based phone from Sony by Christmas, will have to wait a little longer.