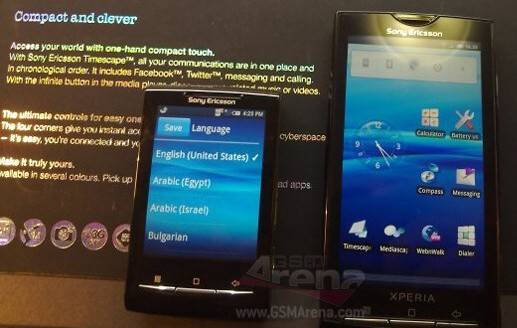 We already know Rogers Wireless recently announced that they will be the exclusive Canadian carrier of the Sony Ericsson Xperia X10. But we didn’t know anything about a mini Xperia X10, according to the folks over at GSMArena, they received in-the-wild shots of a mini Xperia X10 version.

According to the tip, the smaller handset you see on the image above on the left side, is the Sony Ericsson Robyn, which is presumably a codename for a mini version of the XPERIA X10. There aren’t much details on this new handset, other then it runs Android and has a touchscreen. If this Android handset makes it to production, we’re guessing an entry-level market will be its target.

It’ll probably have a lower resolution camera than the 8.1-megapixel with autofocus on the XPERIA X10. We also assume that WiFi, Bluetooth and HSPA should make it to the final product, together with Sony Ericsson’s Timescape and Mediascape. There’s another image of the Robyn below. What do you think, would you buy a mini XPERIA X10?