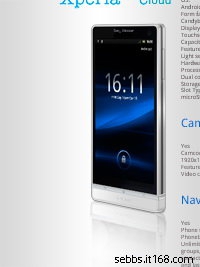 The Sony Ericsson Nozomi (LT26i) has leaked for us in a very tiny cropped picture watermarked from sebbsit168.com. It’s looking quite sleek from what we can see, but there’s really no way to tell how small or large the display actually is. My guess is it’s right at around 4″. From playing around with the Nexus S running an AOSP Android 4.0 ROM, 4″ is a great size to run ICS on. As Chris Chavez notes from Phandroid, it looks as if the actual device name may be the XPERIA Cloud – though that’s not for certain.

If you zoom into the photo you’ll notice a few things; first off under the Camera heading, you can see it will take 1920×1080 video capture. Next you’ll notice it has a dual core processor and even microSD support. I’ve always been a fan of the Sony Ericsson XPERIA line, and this phone looks the best by far. Unlike the Galaxy Nexus, it seems to have three softkeys included near the chin of the device, making navigation not completely dedicated to the display.

It looks extremely thin, but then again most recent XPERIA devices (such as the Ray) were. I hope it makes it here to the states soon, because it would be a shame for the Galaxy Nexus to not have some proper competition! But chances are, our main man Chris Davies over in London will get it first – as most Sony Ericsson devices hit international waters first.