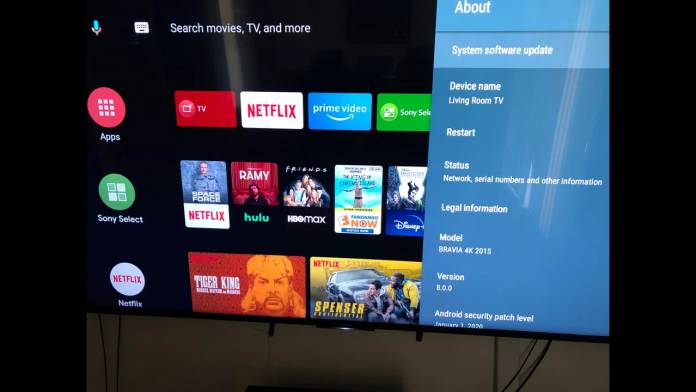 Several Sony Bravia models released way back in 2015 with the Android Nougat OS have not received the next update until now. That’s about to change as Sony is releasing Android 8 Oreo update for the said devices soon. Although this is a version behind the current Android 9 Pie OS update, still users will be delighted to have the newer update which brings loads of UI changes and improvements. Noticeably, it will have the modern Android TV interface and the revamped Google Play Store.

For now, the update is only documented for the KD models, and it will be rolled out in a staged manner. A Reddit user has posted a photo showing the updated interface on his TV. So far, Sony has posted the changelog and firmware download page for the Asia Pacific models only. People in the US might have to wait longer to get the new OTA update.

According to the changelog, the update brings a new Home screen menu, supports Google Assistant and relocates the On Timer icon to the top right-hand side. The supported format for USB/DLNA has been improved with the latest update. It also brings improvements for the Videos, Music, and Photo apps.

Other than that, the Oreo update will remove certain existing features. PlayMemories Online, IPv6 setup setting, One-touch mirroring, Wi-Fi Direct standby function, and Pre-installed PlayStation Video. For users in the Asia Pacific region, the v6.827 firmware update will come anytime soon and more can be learned by going through the changelog.