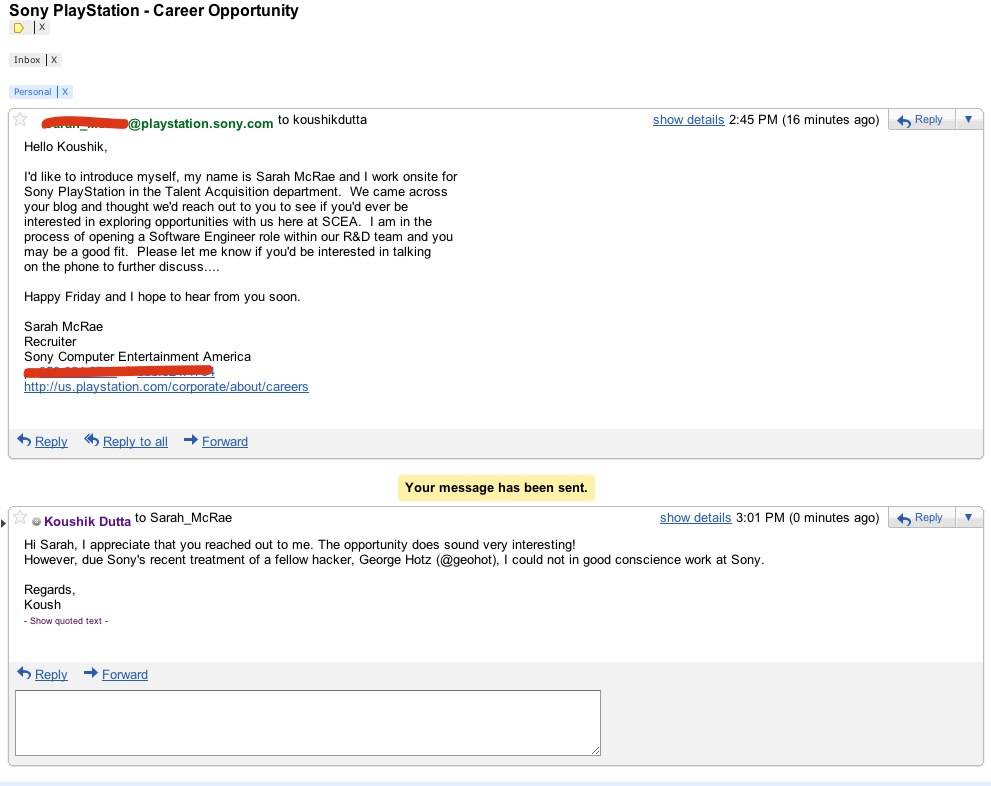 Sony has been clicking around these internets quite a bit lately it appears, having a look for underground or otherwise simply undeniably talented developers to hire for their R&D team. One of the people they found most recently was Android OS hacker Koushik Dutta (aka Koush.) – if you do not know, Koush is an acclaimed fellow, having been posted about thousands of times across the web, most recently here on Android Community for his efforts in rooting the Motorola XOOM. Upon trying to recruit KD to their team, Sony received a rather pointed reply.

What the above letter says, (and you can view this again in the gallery below,) is the following:

From a recruiter at Sony:

I’d like to introduce myself, my name is Sarah McRae and I work onsite for Sony PlayStation in the Talent Acquisition department. We came across your blog and thought we’d reach out to you to see if you’d ever be interested in exploring opportunities with us here at SCEA. I am in the process of opening a Software Engineer role within our R&D team and you may be a good fit. Please let me know if you’d be interested in talking on the phone to further discuss…

Hi Sarah, I appreciate that you reached out to me. The opportunity does sound very interesting!
However, due [to] Sony’s recent treatment of a fellow hacker, George Hotz (@geohot), I could not in good conscience word at Sony.

Oh man, Sony you just got told. We’re living in a rather futuristic community now where a move like harming Geohot will ripple through the ranks of all developers and hackers (those two titles which are often synonymous), causing untold damage. This is a great example of the future in which online communities will be stronger than neighborhood communities or one day countries made by physical boundaries.

All of this said, there has been an important note made by Koush over on a Reddit thread with just the email image you see above and below:

To clear up any confusion, I was not offered a job, just an interview, which I declined out of principle. For those saying “I’m going to regret being principled”, etc. Probably not. Android App sales have been more than good to me. Good, enterprising, devs should never find themselves short of opportunities.