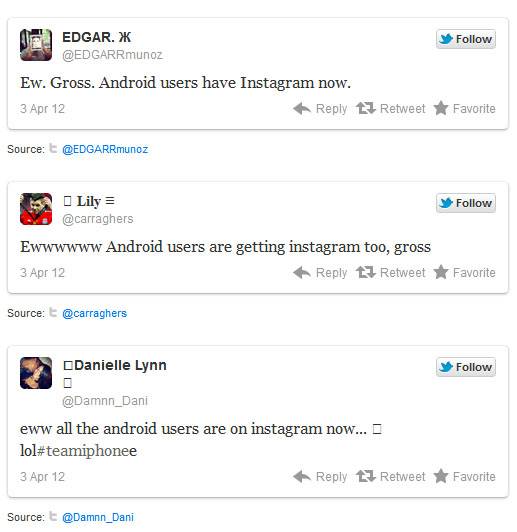 Full disclosure: I’m not a fan of Instagram. I see very little value in low-resolution photos with minimal filters posted to an “exclusive” social network, when anyone can do the same with a smartphone and a free editor. That said, I’m glad to see the millions of Android users who were patiently waiting to get into Instagram finally have their patience rewarded. But one group of people isn’t so thrilled to see Instagram’s potential userbase grow by a couple hundred million: iPhone and other iOS users. And they’ve taken to Twitter en masse to whine about it. Aww, bless their poor little hipster hearts.

Yes ladies and gentlemen, there are iPhone owners, and apparently lots of them, who think that Instagram has been “ruined” by the sudden influx of Android. A running theme on their Twitter complaints seems to be “ew, people with no artistic sense will be able to follow me!” Some are tweeting with the hashtag #teamiPhone, echoing the pop culture battle between Twilight readers that is, like, so 2009. Even less tactful posts seem to imply that Android users are poor, despite one of the most popular iPhone models being AT&T’s free 3GS. For a smattering of retweeted iPhone complaints, you can check out this brand-new and very NSFW Twitter account (warning: tact, taste and basic language skills may not be present).

Why all the hatred? Well, one of Instagram’s founding principles is that you can only post to the service from your phone or mobile device… which, until today, only included Apple hardware. It seems that this isolation has given some Instragram users a sense of artistic entitlement brought on by owning a piece of glass and plastic that millions of others do as well. To be fair, there’s plenty of iPhone users out there who aren’t twenty-something elitist jerks… but by the look of popular social networks,  most of them don’t use Instagram. You stay classy, Apple fans.