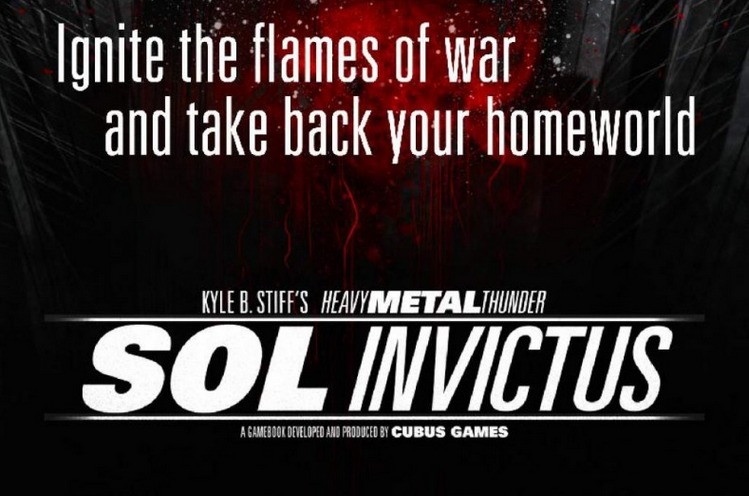 You might be forgiven for not knowing about Sol Invictus – if you didn’t play Kyle B. Stiff’s “Heavy Metal Thunder” which is the predecessor to this gamebook, you might not even know it existed. But we’re here to put a little bit of good old book gaming and science fiction into your world.

Just like Heavy Metal Thunder, Sol Invictus is a gamebook – players will read through the text like a sci-fi novel and from time to time, they will have to test the skills of the main character against story baddies to move the plot forward. This is all done with dice rolls that you just tap into your device. Pretty easy.

In Sol Invictus, players get to play a human character – a fanatic from the Black Lance legion. Essentially, the main character is a slightly insane zealot (what zealot isn’t?) who heads into the worst places in the universe in order to help push the cause of humanity against aliens. In the gameplay, succeed at a dice check and you gain a hero point. These points can then be used for various stuff within the game – like the re-rolling of failed dice checks, or even skipping the check altogether. You also earn extra money from the kills the main character makes in game.

Sol Invictus is a fine sequel, and is easy to take to even if you haven’t played the game that came before it. If you have the time, you can start with Heavy Metal Thunder first, which will only enhance your admiration for the game. But jumping right into Sol Invictus should be a really enjoyable thing nonetheless. The game is USD$1.00 to buy via the Google Play Store.