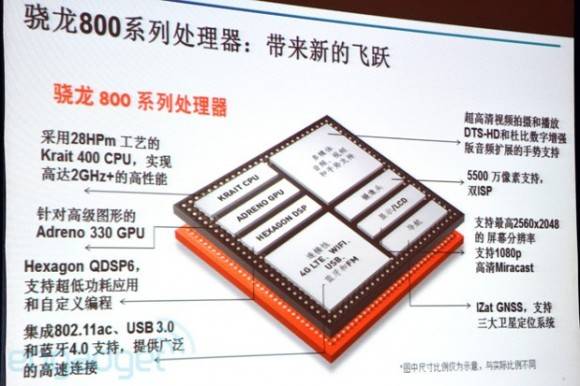 QUALCOMM has its SoCs inside some of the most popular Android devices on the market. Those devices include smartphone such as the GALAXY S 4 and HTC One among others. QUALCOMM’s most popular SoC right now is the Snapdragon 600. The company is gearing up for mass production of its next-generation SoC.

During that event, prototype devices will reportedly on hand but no benchmarks were allowed. The new SoC will use a Krait 400 architecture that will allow the processor to operate at up to 2.3 GHz. The new platform will also have an Adreno 330 graphics processor supporting 30 frames per second 4K resolution playback.

One of the more interesting features of the new Snapdragon 800 is its robust power management capability. The 800 is able to operate each of its four cores at different frequencies. That means for tasks not needing all four cores to be running wide open, those cores can be slowed down or turned off to save power.

[via SlashGear and Engadget]