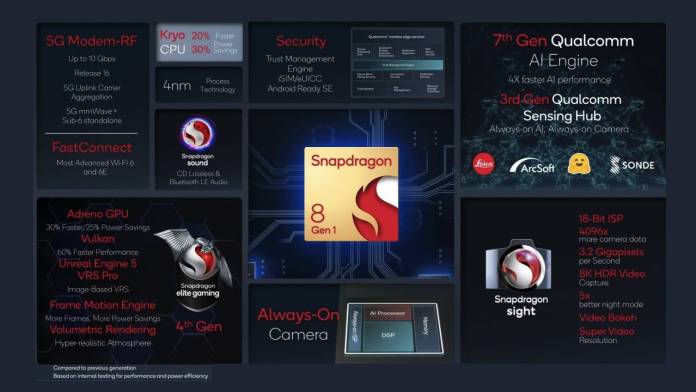 It’s final and official. The latest premium flagship processor from Qualcomm has just been announced. As promised, the Snapdragon 8 Gen1 is now the most advanced mobile platform in the world. It is expected to usher in the next-gen of premium Android phones ready for commercial use before the end of the year and beyond. This chipset is the one we’ve been referring to as the Qualcomm Snapdragon 898. The company has recently announced a rebranding which means the processors will simply be from the Snapdragon line.

The Snapdragon 8 Gen1 is described as the most advanced 5G mobile platform in the world today. It is also the first 5G modem-RF solution to hit 10 Gigabit download speeds so we know it’s fast. The chipset offers Snapdragon Sight Camera Technology which also comes with an 18-bit mobile IS.

The SoC comes with a 7th-Gen Qualcomm AI Engine for on-device AI. Gaming is enhanced further with the 4th-Gen Snapdragon Elite Gaming features. The results are desktop-level gaming experiences for every mobile gamer. Qualcomm made sure this processor is Android Ready Secure Element (SE) Alliance-compliant.

Qualcomm Technologies made the official announcement at the Snapdragon Tech Summit 2021. The new 5G mobile platform is expected to deliver cutting-edge technologies from 5G to AI, gaming, Bluetooth, WiFi, and camera. The next-generation of flagship smartphones are anticipated to use Snapdragon 8 Gen 1. Top global and OEMs like Motorola, OnePlus, Realme, OPPO, Xiaomi, Sony, and Sharp will be releasing phones powered by the new Snapdragon chipset.

Qualcomm’s senior vice president and general manager of mobile, compute, and infrastructure Alex Katouzian said: “As the world’s most advanced mobile platform, Snapdragon is synonymous with premium Android experiences and the new Snapdragon 8 Gen 1 sets the standard for the next generation of flagship mobile devices. It delivers connectivity, photography, AI, gaming, sound, and security experiences never before available in a smartphone.”

The Snapdragon 8 Gen 1 uses the new Adreno. There is 25% power saving and a 30% performance boost. Qualcomm has added three Elite Gaming features to improve on balance between power efficiency and performance. Other special features include the Adreno Frame Motion Engine, desktop-class volumetric rendering, and Variable Rate Shading Pro.

Audio connectivity of your phone will be improved greatly, thanks to Bluetooth LE Audio that includes voice back-channel for broadcast audio, stereo recording, and gaming. There is also the Snapdragon Sound Technology, Qualcomm Aqstic audio codec, and the newest Qualcomm Audio and Voice Communication Suite among others.

Cameras will be powered by the Snapdragon Sight Technology. It will allow phones to work with Qualcomm’s 18-bit ISP (image signal processor). This means a device can offer support for 8K HDR video capture and image capture with speeds up to 3.2 gigapixels per second.