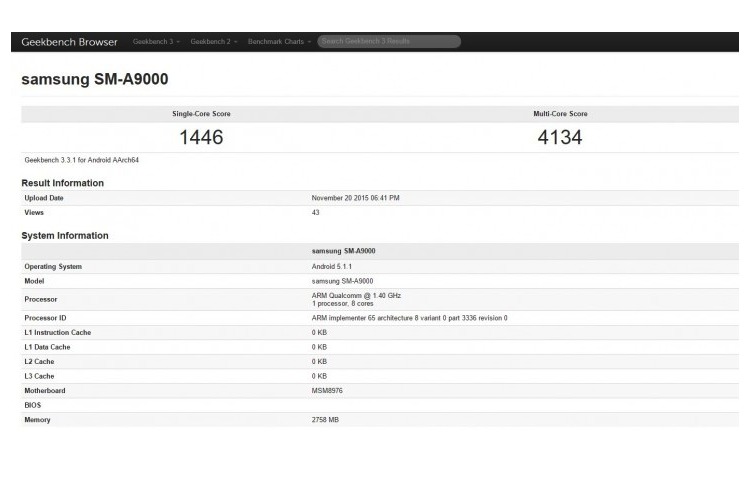 Since we’ve been talking about and checking out the Galaxy A3, A5, A7, and A8, let’s see what’s new with the Galaxy A9. We’re still not a hundred percent certain about the phone’s name although there’s a rumor that it’s been spotted earlier this year in another trademark filing. Still unconfirmed but we’re almost sure that a new phone from Samsung will be unveiled very soon according to a GeekBench document.

If not FCC, TENAA, or GFXBench, a Geekbench sighting usually indicates that a device is almost ready. More often than not, a benchmarked phone or tablet model means that it will be announced very soon. A certain Samsung SM-A900 listed on GeekBench is believed to be the Samsung Galaxy A9.

Based on the document, we can learn that the Samsung SM-A9000 aka the Galaxy A9 will run a 1.4 GHz Qualcomm processor, 3GB RAM, and Android 5.1.1 Lollipop out of the box. Not much details have been shared but the smartphone might use a Snapdragon 620 instead of an Exynos processor based on the MSM8976 motherboard reference. This information could also mean the Galaxy A9 will be another mid-range Android smartphone since the chipset is one of the four mid-tier processors recently introduced by Qualcomm.

There seems to be a lot of Samsung Galaxy A series related news lately we’re thinking that the South Korean tech giant is focusing on mid-range phones. The premium flagship smartphones introduced this year may be clear winners when it comes to mobile performance but the numbers are still not improving. Hopefully, with the mid-range phones, Samsung will sell and earn more as what most of the Chinese phone manufacturers are doing right now– make more high-specced mid-range phones with more affordable prices.