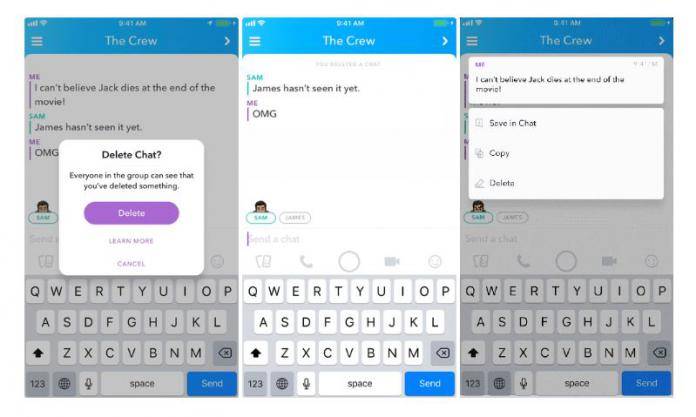 Have you ever sent a message to someone or a group that you wish you could unsend? Even with ephemeral apps where the message only stays for so long, this still happens. Whether you sent something in the heat of the moment or you made a mistake but sent press before you could correct it, the power to delete a message that was already sent is always a user request. Snapchat is now adding a delete feature to your sent messages, as long as the other party hasn’t seen or opened it yet.

This new feature isn’t major and there was no official announcement, but some users have already been able to spot it. You will now be able to delete text, stickers, audio, or photos that you sent through Snapchat’s chat feature. Just long press on the said message and then tap on delete from the pop-up menu. The other options are Save in Chat and Copy, which you probably won’t need since you want to delete it.

The intended recipient will be able to see that you deleted something but they won’t know what it was. If it’s a group chat, all they’ll see is “Everyone in the group can see that you’ve deleted something”. Now if anyone asks what that was, you have the option to plead the fifth or just tell them you made a mistake hence the delete. Hopefully no one

In other Snapchat news, version 2 of the Spectacles is now available on Amazon. The much-improved device seems to be connecting more with users as it is now out of stock on Snapchat’s website a little while after they launched it last April. Now that they’re available on the online retail giant, it may even be more attractive to some customers, particularly those who have same-day shipping or overnight shipping on their accounts. It’s still priced at $149.99 but you can’t customize the color of your lenses.