When they released their first ever hardware with Spectacles, Snapchat expected their hands-free camera to be an instant hit with their loyal users. However, sales did not really reflect that initial excitement. Despite the less than enthusiastic response to it, it’s not stopping the company from releasing a second version of it. The new Spectacles were officially announced and it’s basically the same as the original, only with improved features of course. And as expected, it’s also slightly more expensive than the original.

Despite selling only around 220,000 pairs of the first version, the new Spectacles is now officially available and it has a smaller profile so it won’t look as weird when you wear it. It is sleeker and has a slimmer frame and charging case. And even more important for those who are heading to the beach or the pool this summer, it is water-resistant and like the older one, it is UVA and UVB rated. You will also now be able to take photos as well, since not everyone just wants videos for their Snapchat stories. Just long press to take a picture and then tap to take a 10-second video and extra taps will let you take a longer 30-second video. 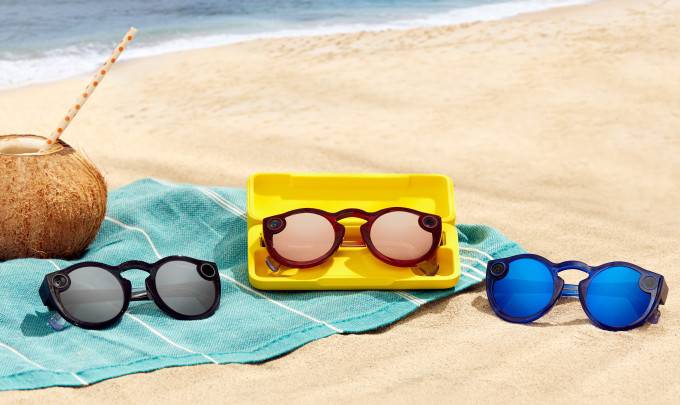 You can still add stickers and drawings to your Snaps after you’ve exported them, but you can’t add AR filters. You only need Bluetooth and pressing the shutter for seven seconds to be able to sync the photos or videos to your phone so it means the process is now four times faster. And everything will be transferred in HD quality so hopefully no grainy or blurry images and videos (unless that was your intent).

The new Spectacles are now available in the US, Canada, the UK, and France, which are its four biggest markets. It’s priced at $150 and comes in onyx black, ruby red, and sapphire blue.