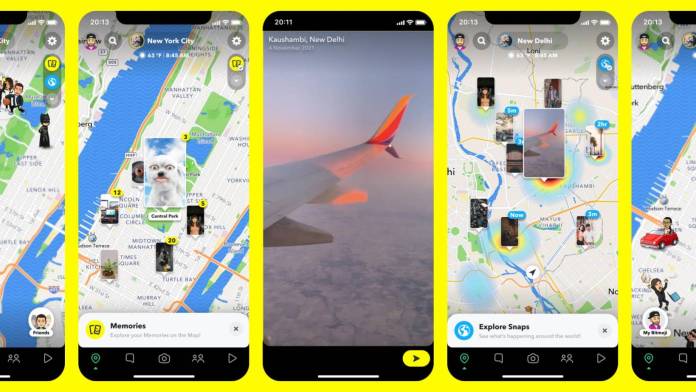 Previously, Snapchat revealed that they were working on adding layers to one of its popular features, Snap Map. Now two kinds of these Layers are making their debut on the app: Memories and Explore. These “special experiences” will make the feature more personalized and useful for users, aside from seeing where all your Snapchat friends are and what they’re doing. The two layers seem to be just the beginning and we can expect more later on as the app continues to battle for relevance in a Tiktok world.

The Memories layer will let you see in the Snap Map where you took particular Snaps. So you can go down memory lane as you browse through the map and look back on these little adventures that you took. Don’t worry as these are all private and they will not show up in other people’s Maps even if you’re friends with them. In the same way, you won’t be able to see your friends’ Memories on the map.

The Explore layer lets you go on a virtual expedition and see the sights, events, and other happenings around the world, if people post their public Snaps. It actually reimagines the heat map as you’ll see the volume of activity on any particular place, which might indicate an ongoing event or if that place is pretty popular as a tourist spot. Tap on any of the highlighted regions and look through the photos and videos submitted by users.

Snapchat gives a preview of the layers that are coming soon as they said they are working with their partners Ticketmaster and the Infatuation. This means that users will soon be able to find upcoming shows and nearby restaurants through these upcoming layers, respectively. Previously, Snapchat also added a new feature called My Places which recommends places to visit where your friends have been and which is popular with Snapchat users.

To use Layers, go to Snap Map, tap on the button for layers in the upper-right corner and choose which one you want to use. You can toggle between Memories and Explore now and probably the others too when they become live.