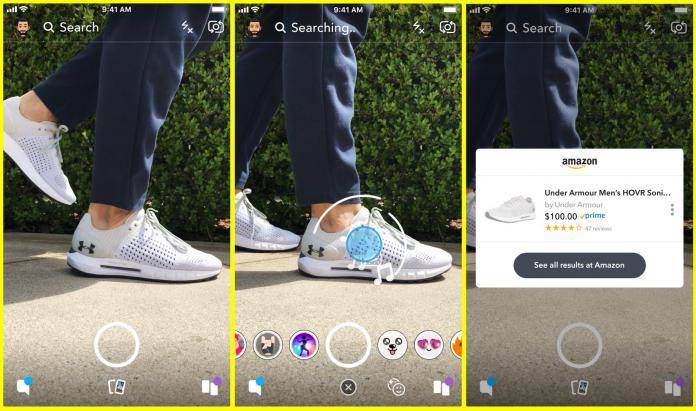 You probably don’t think of Snapchat as a shopping app per se but it looks like the messaging app actually wants you to see it that way. As other apps have continued to imitate the things that made it hugely popular a few years ago, they have to come up with things that would make it stand out once again. One of these things that they’re hoping users will find useful and that would enable them to monetize is bringing not just visual search but also a link to the biggest e-commerce site in the world: Amazon.

The new feature is actually pretty easy to use. If your friend is wearing a pair of shoes that you would love to have, point your Snapchat camera at it and hold on the camera screen. Once the app recognizes the image, you’ll see an Amazon card appear on the screen with a link to the specific product or something similar to it. Just tap on the product you want to buy and it should lead you to Amazon.

If you have the Amazon app installed on your smartphone, it should lead directly to that. But if you don’t it should bring you to Amazon.com on your phone’s default browser. You can then either complete the purchase if your mind is made up or continue browsing if that’s not the product that you want to buy.

This feature will also work on barcodes on products. So for example you’re browsing through the shelves of a store and you see something you like. You don’t have any plans of buying it from the store right now but you can use the Snap camera to look for where you can buy it on Amazon. Do the same process and then save the results for buying later.

The new feature is still in the testing stage and so it might take some time for it to roll out to Snapchat users. When it arrives on your app, try it out and let us know how was your experience.