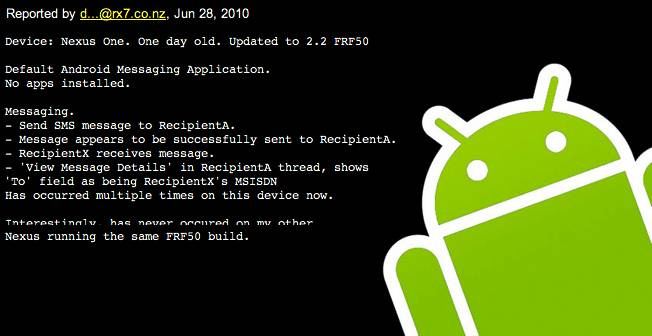 I thought I was just going crazy! Apparently more people than just myself are having trouble with text messages from random people. This new bug causes SMS messages to apparently randomly be sent to the wrong recipient. It’s not clear yet it this is regulated to people on contact lists or if the messages are being sent completely randomly. The original developer who first reported this bug says that the messages appear to have been sent successfully to their intended recipient, but that they’re actually being sent to Recipient X!

This issue can be found on code.google.com as number 9392 but as you can see, it’s been graded as a simple “medium” priority. Harsh! You’d think that one of the most basic functions of a modern phone screwing up in Android would be a TOP priority for Google. Imagine that. Also notice how old the original post is – JULY 2010! This problem is still being posted on several months later without a word from Google- what’s up? Are any of you readers out there having the same problem?